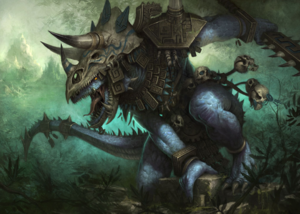 The Saurus Oldbloods are amongst the oldest and most powerful living warriors within the Lizardmen Empire of Lustria, ancient beings who have been alive for several thousand years.

Though slow to react, these mighty reptilian warriors are not dull-witted or simple, quite the contrary, they know just about everything there is to know about fighting, and often care little for anything else. Since it has never been known for a Saurus to die of old age, the longer a Saurus lives, the tougher and more ferocious he becomes. Their scales become thicker and harder, and their sheer presence encourages the younger Lizardmen to greater acts of savagery.

Many Oldbloods bear markings on their bodies which help to indicate one or more of the inscrutable Lizardmen gods that favor them. These markings may be a subtle change in hue of their crest or more obvious signs, such as a pale or even albino tone. Those most favoured are destined to become mighty heroes and leaders of their own armies. Due to their ancient status, Oldbloods are often attended to by scores of Skinks so that their every though can be directed towards the impending battle. These servants will secure bronze armor-plates and otherwise help prepare them for battle. The Skinks will often daub warpaint and adorn the Saurus with oils, precious metals, the shrunken heads of sacrificed foes and other such grisly trophies. This not only marks his status or rank, but also serves to warn the enemy that the vengeance of the Old Ones, made manifest in over eight feet of savage reptilian muscle, has come for them.

These Saurus are without mercy and capable of slaughtering entire regiments with terrifying acts of savagery. With lethal efficiency, these cold-blooded killers dispatch their foes, each and every movement a killing stroke. There is no finesse to the massacre, the enemy is simply torn apart limb by limb. When a Saurus leads an army to battle, only the greatest of heroes and warriors could ever hope to stop this ancient warrior from achieving ultimate and glorious victory.