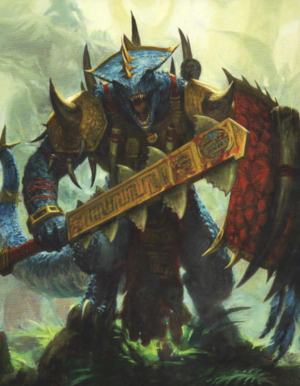 Saurus Scar-Veterans, also known simply as Saurus Leaders, are the amongst the most powerful of their savage kind.

More than simply eight feet of savage reptilian muscle, Scar-Veterans are perfectly designed killing machines, their martial prowess further enhanced by battle experience. To their foes, be they ancient nemesis or simply those who trespass upon the sovereign territory of their masters, the Saurus leaders are nothing less than the vengeance of the Old Ones made manifest. [1a] Only the mighty Oldbloods are even above these mighty warriors, for they are far more ancient and powerful beyond mortal reckoning.

Some Saurus leaders are marked for greatness at their spawning, bearing a different pattern or crest to the rest of their brethren. Those few who emerge with pale or albino skin tones are always revered — for they are the favoured of the Old Ones and destined to become mighty heroes of the Lizardmen. Yet a Saurus need not be different from his comrades to gain veteran status; he need only survive.[1a]

All Saurus Warriors are spawned with the knowledge of how to fight, and the longer each lives, the more battles he survives. The longer he survives, the more he understands the needs not just of a lone warrior, but also of an entire army. While a Scar-Veteran cannot explain the meaning of a refused flank, he will know how to launch such a manoeuvre. [1a]

A Saurus Scar-Veteran could not express why he chose a defense in depth to defeat a foe, yet he will inexorably recognize when such situations are called for and react accordingly. With only a low, grumbling growl and a final bellow, a Scar-Veteran can set an entire Lizardmen battle line in order. Once combat begins, these Scar-Veterans hurl themselves into the fray with merciless efficiency. Each stroke, bite or thrust dispatches a foe, often with the enemy literally torn limb from limb by the ferocity of the attack.[1a]