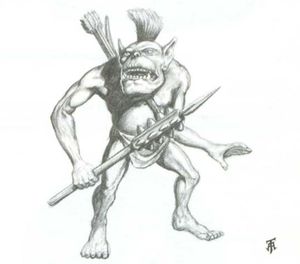 Savage Orcs are by far the most primitive breed of Orc. While most of the greenskin races appreciate technology for its military applications, Savage Orcs have a primal, neolithic society, and shun these advances. [3a]

Many centuries ago all Orcs were similar to the Savage Orcs, but it is said that it was the Chaos Dwarfs who taught the Orcs the knowledge of metalworking. Some tribes either were too remote to gain from the knowledge, or intentionally disregarded these new ways. Since then the Savage Orcs and the more advanced Orc tribes have become entirely distinct although they intermingle in the Badlands.[4a]

Savage Orcs tribes inhabit the most remote areas of the world: large forests and especially the deep jungles of the Southlands. Some live on the great plains, following the mighty herds of boars and other animals. In the Southlands, the powerful sunlight and heat has strangely affected the already brutish brains of the Orcs, making the Savage Orcs single-mindedly savage and brutal. [4c]

Savage Orcs do not wear any armour and use weapons made of wood, stone, and bone. On occassion they might trade for metal weapons. [2a][3a]

They also daub crude warpaint upon themselves, firmly believing these wards to protect them from harm, and in battle fighting as berserkers with little regard to their own safety. This firm belief somehow generates a magical protection which indeed protects them somewhat. To the Savage Orcs, this proves the superiority of their ways over the Orcs who have embraced technology.[2a]

Interestingly, the Savage Orcs possess another combat innovation unique to them: the Big Stabba. This giant spear is rammed on the charge into the enemy ranks or smashed into the hostile monsters, being deadly to both.[1]