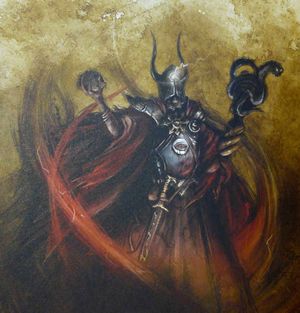 Sayl the Faithless, Twisted Seer of the Wastes [1e] is a Chaos Sorcerer Lord. [1a]

He does not worship any one of the Dak Gods but pays lip service to all forming bargain and pacts with godlings, champions and daemons alike before betraying them. [1j]

His head has mutated into a twisted mass of shifting flesh with a single eye which can see beyond the mortal realms and into the future. [1j]

He was apprentice to the Shaman-sorcerer Schalkain the Vile, one of seven in his covenant who used their powers to guide their tribe. Almost immediately, Sayl twisted his peers against each other and goaded his master into a daemonic ritual which Sayl sabotaged, having Schalkain torn apart and the other apprentices were melded in a entity which became known as Nightmaw the Spawn. [1j]

Sayl had finally become overlord of the Dolgan tribes but was beset by enemies beyond the tribes but also despised by his own people. When the great horde of Tamurkhan arrived on his border he saw an opportunity, first dispatching those he trusted least to harass the great army of Nurgle but avoiding conflict with the majority of his forces. Finally, Tamurkhan called for a parlay and an alliance was agreed with Sayl leading many warriors to join the horde. [1a]

He had hoped that they would immediately strike out towards the rich lands of the Empire or Kislev but instead the champion of Nurgle led them to the Gallows Tree seeking boons from the Pox-mother. As Tamurkhan sought daemonic aid, Sayl tried to gain power within the horde, sending riders to gather reinforcements as well as foraging. [1a]

Following the return of Tamurkhan, the Champion announced that they would head down the length of the Mountains of Mourn, then through the Dark Lands and attack the Empire from the south with the aid of the Lords of Zharr. [1b]

During the long trek, Sayl led his own forces and many allied Beastmen against the Tower of Ashshair, a mighty fortress of Grand Cathay that guards the trade road that leads to the ancient empire. Sayl had long desired to plunder the secrets of the eastern nation and now saw his chance. [1c]

He convinced the tribal leaders to attack first, roaring out of the night only to be met by illuminating fireworks that lit them up for the massed firepower of the tower. Mighty Ghorgon hammered at the gates only to be struck down by the magic of Dragon-blooded Shugengan but still the beastmen clambered up the walls using vines conjured by the Bray-Shamans. A brutal battle erupted in the courtyard beneath the tower with Bannermen facing the bestial horde and although they fought hard, they were overcome at last. [1c]

Still Sayl held back his Dolgan warriors, feeling a great spell beginning to manifest. As the Beastmen cavorted in victory, a comet crashed down upon them, slaughtering many before Onyx spirits manifested to wrench them into the air and tear them apart. Finally the tower gates opened for more bannermen to finish the few survivors. His magic was only able to cover the retreat of the broken remnants of the horde and he ordered his Dolgan to turn away back to the main force. [1c]

As the great horde attempted to breach Winters Teeth Pass through the Black Mountains it was assailed by a equally mighty Night Goblin force. During the ensuing battle, Sayl and Nightmaw found themselves cut off and surrounding, forced to rely on his own mighty powers and the devouring mouths of Nightmaw to survive and punish the impudent attackers. As they tried to retreat a great war machine of the Chaos Dwarfs was assailed nearby, a pair of Colossal Squigs falling upon it - although one was swiftly dispatched, the other smashed it on its side and as Sayl drew upon his power once more the land train exploded and the sorcerer screamed voicelessly as he burned. [1e]

His burnt, broken body was dragged before Lord Drazhoath who told him that the sorcerer owed him his life which Sayl had no choice but to agree with the Dwarf. Sayl warned him in turn that some great power was moving against them, that had concealed the threat from both of their seer craft. [1f]

Having fought their way through the pass, the horde rested at the foot of the Black Mountains and the Dolgan spread out to ravage the surrounding land, gathering what information they could on the Empire that lay before them. At a council of war, he revealed where the largest city his warriors had seen was located - sitting at the junction of two rivers and with tall walls. [1g]

Sayl led his Dolgan north-west to deal with several minor watchtowers and keeps. The town of Hornfen was first to be struck by the raiders, its moat simply waded through by the Mammoths who then shattered the gates - not one of the population survived to see the dawn. Finally twenty one days after setting forth, the horde arrived at the city and after a short, brutal siege it fell. Yet it was Sayl that discovered the mistake, this was not Nuln, the birthplace of Magnus that Tamurkhan sought but Pfeildorf. [1g]

As dissent spread through the vast force, Sayl led the disgruntled Chaos Dwarfs to the fortified town of Dakarhaus which they quickly took, enslaving the survivors and creating a secure base for themselves. [1g] As they advanced in Nuln itself, Sayl was mounted on one of the surviving war mammoths, resplendant seated in his ivory throne and now the Kurgan looked to him for leadership as well. [1h]

The great battle for Nuln now raged and Sayl, his mammoths and the Kurgan cavalry looked well placed to shatter the west flank of the Empire army but as he and the Khans tried to marshal them they were attacked by a new force. Floating pontoon forts had approached and now opened fire with a devastating barrage of mortar fire and archery. Many were killed trying to assault the river craft and it took a long time to restore order and attack their original target - the Crow's Levee. [1i]

The Empire had used their time well and a defensive line had formed, centred around the Nuln Ironsides and their allied wizards. This proved too much for the attackers, the last mammoth falling and even Sayl being struck down by a well-aimed bullet, knocking him unconscious. When the headless body of Orhbal Vipergut and the burning corpse of his dragon crashed down amongst the Kurgan and assailed by the magics of Elspeth von Draken and those of the Gold Order the tribes finally broke and fled the field. [1i]