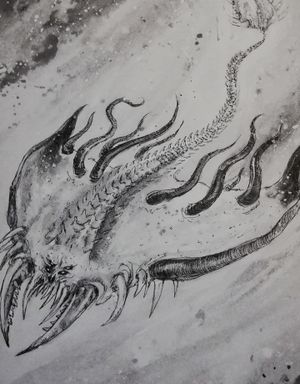 Screamers are ray-like daemonic creatures that swoop down on foes and cut them apart with their sharp tusks, but prefer to emit an unholy scream, that damages and terrifies most mortals. [2a]

They inhabit the Realm of Chaos as glimmering shoals of predators. [1a][3a]

They are drawn into the material world from the Realm of Chaos when armies of Chaos gathers, pulled in by the heightened emotions and the carnage and hatred of the battlefield. [1a][3a]

Some of them are utilized to pull Chariots of Tzeentch, that are piloted by demons, called Flamers of Tzeentch as part of the Daemon army in the Storm of Chaos. Others are transformed into a Disc of Tzeentch to act as a mount for favoured servants of Tzeentch. [3a]

They are known as Shrieking Skyrays, Sky-sharks of Tzeentch. [1a]