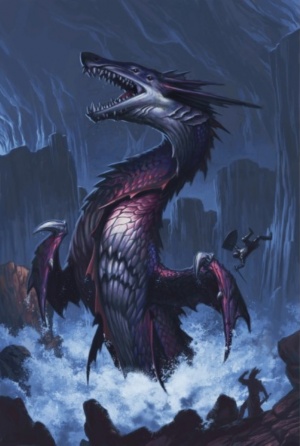 The Sea Dragons are the largest of the Dark Elves' sea-going monsters [3a] whilst the High Elf Mages of Lothern can bind those who can venture onto land which they know as Merwyrms. [4a]

Merwyrms have long, sinuous but muscular bodies with four stubby limbs that are tipped with razor sharp claws and can move with considerable speen both in the sea and on land. They heal quickly, fueled by a bottomless hunger which compels them to endlessly seek food whilst the migthy tail that propels it through the depths of the sea is a powerful weapon that can shatter castle walls. In battle a crushng darkness envelops them as well as a aura of bitting cold. [6b]

Many are found in the Boiling Sea and are hunted by the Dark Elves to replenish their stock of monsters. [3a]

Once, long ago they were true dragons, ridden by the ancestors of the Dark Elves, but down the centuries they have been infused with the evil magics that permeate the Arks. They have mutated, becoming something less than true dragons and yet more. The Sea Dragons have grown so gigantic that they have lost the power of flight and have to spend their lives afloat to support their own weight. Even so, they remain capable of ripping asunder the biggest ships of other races' fleets.[1]

Legend has it that in the sundering wars between the Elves and the Dark Elves a Dark Elf Dragon was struck from the sky by a mighty Elf Champion. The Dragon fell into the sea, where the dark, cooling waters bathed his wounds and provided refuge from the battle. It is said that the Sea Dragons are descended from this beast.[2]

In 1230 IC a Merywrm known as the Beast of Nordland plagued the province of that name until it attacked the harbour of Massenfel where as it devoured the hapless villagers, the Doomlord Dieter Helsnicht himself appeared. He compelled a Necrofex Colossus to arise and attack the beast and a brutal battle ensued, lasting all night until the beast destroyed its foe as dawn broke. However Dieter unveiled a scroll of Kadon and in turn bound it to his service as he returned to the Forest of Shadows. [6b]

The Wizard Orsini Sardus‎ bound a Merwyrm he called Silak to serve himself and the city of Vedenza in Tilea. The Merwyrm would prove vital in defeating first the forces of the neighbouring kingdom of Larhgoz and in clearing a path through Skaven vessels to the Isle of Grief. [6a]