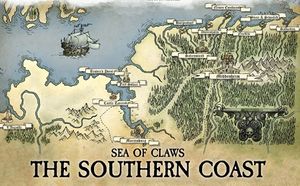 Southern coast of Sea of Claws

The Sea of Claws lies north of The Empire and south of Norsca bordered on the east by Kislev. [1a]

To the west it joins the Sea of Chaos and then the Great Ocean. It is known to be patrolled by a great number of Norse longships who make frequent raids on the coastal regions of Bretonnia, The Empire and Kislev. [1a]

Many monsters lair beneath its depths. [1a]

Daggerfish and Grymmcrab live in large numbers in the sea and are harvested by fishermen. [1a]

The merchants of L'Anguille and Marienburg have fought over the trade routes that cross the sea for centuries. [1b]