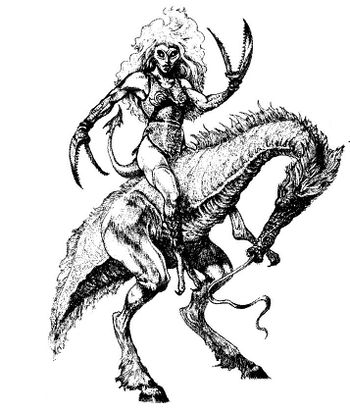 A Seeker of Slaanesh

Seekers of Slaanesh (also known as Mounted Daemonettes [2a]) are the fast-paced cavalry of their patron god, Slaanesh's Daemon hordes. [3a])

They are, essentially, Daemonettes who ride atop the swift and deadly Steeds of Slaanesh. As such, Seekers have the ability to cover vast distances at unbelievable speeds on the battlefield. They are also an excellent tool for out-flanking foes given their ability to skilfully outmanoeuvre almost any enemy. Despite their speed, Seekers are also known for ambushing foes as well, adding further use and value to the commanders they serve.[1]

Like all Daemons of Slaanesh, they possess a haunting and seductive quality - at rest subtle, hypnotic colours drift across their skin whilst when they move, it pulses in time with their skittering gait. [3a])

Those that they hunt often hear their cries echoing in their dreams as the Daemonettes content to delay the kill and their own satisfaction but when they choose to move in for the kill they are devastating with the ensuring tongues of the steeds and the Deamonette’s own claws and swords tearing their prey apart with ease. [3a])

They are called the Darkling Delighters, Disciples of Decadence, Riders of Slaanesh. [3a])