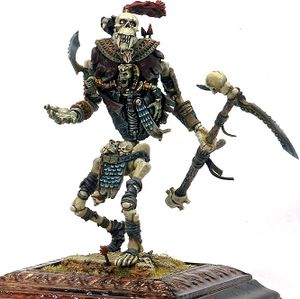 Sehenesmet is the Vizier of the tomb city Quatar in Nehekhara. [1a]

The city is famed for its towering statues, mainly representing the gods and mighty kings of the past. Sehenesmet is responsible for a good deal of these, and in his current state he has been caring for them for many centuries. His devotion to his work has been seen by many of the tomb kings. [1a]

He is unmatched in his abilities and has refined his magic to allow him to raise many workers to help him. It is he who inscribed the monoliths that guard the entrance to the Valley of the Kings and he has created a land of walking statues, talked of in hushed voices by the Arabians. It is said he even animated the great stone guardian of Quatar, a hybrid of lion and eagle.[1a]

It is now rumoured that he has put himself into a giant construct to gain extra strength so that he may build grander projects for the glory of Nehekhara.[1a]