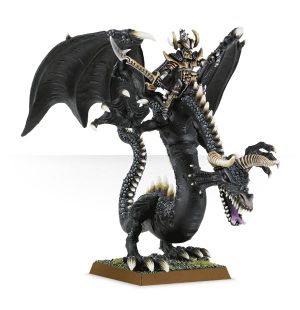 Seraphon was a female black dragon that served Malekith as mount. She was the progeny of Sulekh, who had served as Malekith's mount before the Sundering.[1a][2]

Unlike many dragons, Seraphon could not speak.[1b]

Seraphon fought with Malekith during the End Times. In the battle for the Blighted Isle she was wounded in the wing by an arrow shot by Alith Anar which rendered her unable to fly.[1c] She was further wounded by Tyrion and almost killed, but was spirited away with Malekith by Teclis and his matron Lileath.[1d] Malekith later nursed Seraphon back to health using his sorcery and she became able to fly again.[1e]

Seraphon fought again in the battle for the Isle of the Dead. Here she was wounded by a spell from Morathi.[1f]