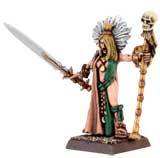 Serpent Priestesses are position held by war devotees within the Amazon Sisterhood.

These Amazon warrior mystics wield powerful magic and are knowledgeable in navigating the jungle. [1b]

The nature of the Amazonian Sisterhood is largely unknown to outsiders, but it has been observed that particularly warlike devotees are referred to as 'Serpent Priestesses'. These warrior-mystics are potent magic wielders, and wise in the ways of the jungle. [1c]

On occasion, a Priestess will appear to aid and guard an army fighting in Lustria. Any army that can count one as an ally is fortunate indeed. Serpent Priestesses are also sometimes willing to work as mercenaries. [1b][1c]

A Serpent Priestess is a native of of the dark depths of Lustria, and the jungles hold no peril for her. [1c]

Other Dogs of War, the Dwarfs, the Empire High Elves, Lizardmen, Ogre Kingdoms and the Wood Elves will sometimes be guided by a priestess. [1c]

Very occassionally and usually in an effort to lure them to their doom, a serpent priestess may aid darker-hearted armies. [1c] Even when Priestesses are on opposite sides they will not fight each other directly. [1b]