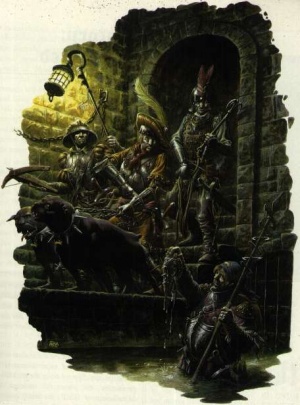 A patrol of the Sewer Watch.

Large sewer-systems and other tunnels are an obvious weakness in the defence of large cities. It's the unenviable mission of the Sewer Watch to constantly verify, control and patrol them.

Emperor Mandred Skavenslayer organized the Sewer Watch in The Empire to protect the cities against future Skaven invasions.[1][2]

Since that time its standing and reputation has declined and today only the desperate and poor enlist in the Sewer Watch. Many of its members are former brigands and criminals. Local authorities usually don't ask too many questions; tacitly choosing to ignore the past histories of new recruits.

It's a hard and dangerous task; the dark and stinking sewers are natural hideouts of mutants and sometimes used by Chaos cultists. A greater threat are the Skaven, who often use the sewers as a means to infiltrate the cities above.

The Sewer Watch is also on the lookout for smugglers, who occasionally use the tunnels and larger sewers to smuggle their goods into the cities.

The men of the Sewer Watch are common victims of the conspiracy of silence. Their dubious background is one of the reasons why their reports about "Ratmen in the sewers" are usually discarded as exaggeration.[3]

The Sewer Watch is a respected institution in Tilea; the Skaven menace is more evident and local authorities pay well for the services of experienced mercenaries willing to work in such a dangerous and odorous place.