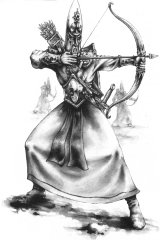 The Shadow Warriors are the descendants of loyalist Nagarythe Elves. [1a]

The Shadow Warriors are merciless and ruthless, and as a result many of their High Elf brethren regard them with unease and even a bit of suspicion. Many whisper that the Shadow Warriors are "tainted by the Witch King", however, their hatred of the Dark Elves and their loyalty to the Phoenix throne are beyond doubt. [2a]

Druchii still raid their lands, destroy their settlements and steal their children so any who are captured by Shadow Warriors can expect a long and very painful death. [4a]

Some travel to other lands as wandering adventuers. [2a] When a High Elf Army travels to other lands, they are scout for it, killing their oppsoite numbers in the enemy army. [4a]

Uncorrupted by the Cult of Pleasure they refused to follow Malekith during the Sundering, remaining loyal to Caledor I instead, and choosing Alith Anar, the Shadow King, as their leader.

After the civil war, the Shadow Warriors rejected most trappings of civilisation, adopting a nomadic way of life. Divided into several warbands and living mostly in the Shadowlands, they protect Ulthuan from the countless Dark Elf raids and serve as scouts for the High Elf armies. [1a]

They also wage a guerilla war in Naggaroth itself, ambushing Dark Elf patrols and raiding their villages

The Shadow Warriors worship mainly Loec and Lileath and hope for salvation from the goddess of moon and purity.[4a]