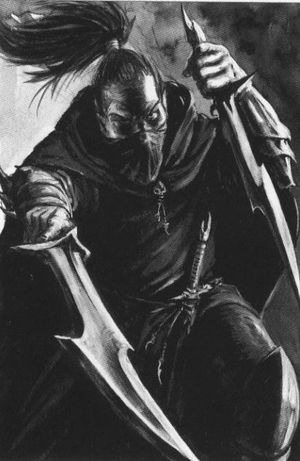 Shadowblade, Master of Assassins is a Dark Elf Assassin. [1a][2a]

Shadowblade is a young elf, only 150 years old but he has already gained a legendary reputation - tales of his exploits being told as bed time stories or sung by minstrels in Naggaroth.[1a] [2a]

He slew his former master Alondir Deathshade in 2416 IC. [3a]

He once slaughtered the entire crew of a High Elf Hawkship, one by one over several days, leaving only the horribly mutilated captain alive to tell the tale. [1a][2a]

Following the destruction of a Black Ark by a fleet from Marienburg, the Burgomeister survived an attempt by another assassin and posted mroe than twenty loyal guards to protect his chambers night and day, some even within his rooms. he was found dead one morning with more than twenty stab wounds but not a single guard had been harmed or even seen anything. [6a]

Shadowblade now reports only and directly to Hellebron. She has used him to eliminate many political rivals but she has never sent him after Morathi, but it is unclear whether this is due to the time not being right or that his loyalties are questionable in this one matter. [4b]

In 2518 he leads a small group of Assassins to Cothique where he poisons the rivers causing a crippling plague. [4a]

Some say that he is actually the son of Morathi herself, others that he was trained as a Swordmaster by Belannaer himself. [6a]