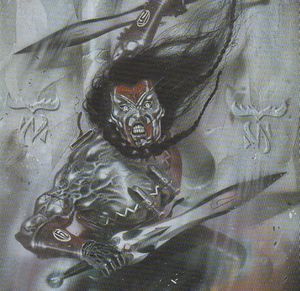 Shadowfast from the cover of Warhammer Monthly 13

Beastmen were instructed to lure Shadowfast by capturing and torturing Way Watchers, killing the beasts, the wardancer discovered that Nastor Rakk was awaitng him near the now burning family tree of the elf. [1a] Shadowfast ran quickly to the sacred mounds of Equos to confront the Champion of Nurgle who had retrieved a staff of power from the buried elvish dead with which he could raise them as ghosts and command them. [1b]

Refusing to fight his dead kinfolk, the wardancer was captured and about to be sacrificed when another sorcerer spoke inside his head and gifted him with the command word to take back control over the staff. The ghosts of the dead elves were then swiftly turned upon Rakk and his warriors, killing them all before returning to their rest. Shadowfast placed the staff with them but when he awoke next morning - it had returned to him. [1b]

Seemingly bound to the artefact, Shadowfast began searching for answers - entering The Vaults he came upon other elves being attacked by Skaven and came to their assistance, only to discover that they were in fact Dark Elves! [1c] Led by Katrar, the Druchii had been searching for the staff themselves, in the ensuing conflict, Shadowfast unleashed the power of the artefact and raised the dead Dark Elves to fight for him until they had all become as ghosts, discovering from them that the staff was linked to the nearby castle of Drakash the Boneseer. The Wardancer led his ghosts to it, even as undead forces began to emerge from its gates. [1d]

Whilst the ghosts of the Dark Elves engaged the other undead to keep them at bay, Shadowfast entered the castle but a force of skaven serving Warlord Skarros began their own attack on the fortress. He found the necromancer but also discovered that he was but a pawn of a Dark Elf lord, the one who had gifted the wardancer with the words of command to the staff of power. The Druchii opened a portal to the Land of the Dead and as Shadowfast fought the necromancer and skaven he was flung into it. [1e]

He emerged on the infamous Blighted Isle, where ancient elvish spirits from The Sundering still did battle, there he discovered that combining the staff with the orb of power that the Dark Elf lord held would grant the holder power over all the ghosts of that place. With the aid of High Elf spirits he fought clear and back into the realm of the living, but was followed by the lord before the portal closed. Unable to kill one who already died once, Shadowfast destroyed both artefacts and killed the Druchii. [1f]