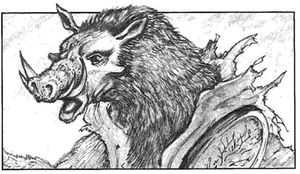 Shapechangers are elves highly regarded as both the favoured kin of animal spirits and warriors. [1a]

They have less control over their transformation than their human counterparts and will transform into either Bears, Boars or Wolves, often in the middle of a battle. [1a][2a]

Shapechangers are rare and initially in battle often blend in with other members of a Warrior Kinband. [2a] Some Beastmasters are Shapechangers, adopting the form of the beasts familiar to them. [3]