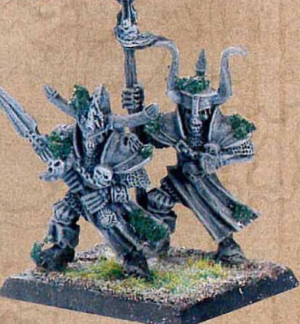 A pair of Simulacra.

Sculpted in the images of the almost countless deities of death and the dead that prowl the warrior grounds of the otherworld, it is said that these statues stalk the lands on the nights of the new and full moons. Several of these edifices stand atop the site of each ancient barrow, bound and commanded by enchantment to watch over the earthly remains within, awakening only to confront those who would disturb the tomb.

Fortunately for Heinrich Kemmler, it took but a little necromancy to bind them to a new master, and he used them to great effect in his armies.