Sister of the Thorn 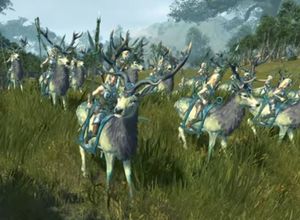 Sisters of the Thorn.

The Sisters of the Thorn are Ariel’s handmaidens. In many ways, they are equal and opposite to the Wild Riders of Kurnous, a sisterhood pledged to sorcery and subtlety where Orion's equerries know loyalty only to the glory of the hunt. Where the Wild Riders are borne into battle on steeds as reckless as they, the Sisters ride upon Steeds of Isha — mounts whose viciousness lies hidden beneath a graceful aspect.

The Sisters’ nature and origins are shrouded in mystery. This has not prevented Wood Elf skalds from recounting stories that tell of such things. It is, after all, in the nature of bards to weave tales to fill the voids left by absent truth. If they are to be believed, the Sisters of the Thorn could be anything from Elf-maids possessed by Dryads, splinters of Ariel’s soul given life by Dark Magic's influence, an exiled cabal of Naggarothi sorceresses, or one of a hundred even more outlandish theories. The Sisters have heard all these stories - little that occurs in Athel Loren escapes their notice, and their tendrils of influence reach into almost every hall — yet they do not care. The bards, by spreading these tales, have done more to obscure the truth than the Sisters ever could.

Though Orion’s Wild Riders are respected, but not especially well-liked, the Sisters of the Thorn are both loved and feared by almost all Wood Elves. Loved, because they respond readily to requests for aid; feared, because the price they exact for assistance is often more than the supplicant is willing to pay. They may imbue young warriors with peerless battleskill, but in exchange steal all kindness from their soul. They might answer the pleas of an Elf-maid forlorn in love, then years later steal away her first-born child. It is even within the Sisters’ power to stave off death’s hand, but they will only do so if a life is offered in exchange, and the petitioner is seldom permitted to choose the victim. In other lands, the Sisters of the Thorn would be driven into the darkness or burnt at the stake, but in Athel Loren, they understand that there must be a balance for everything, and that those who deal willingly with the Sisters must be prepared for the consequences.

Just like their mistress, the Sisters of the Thorn are eternal; they seem never to age and succumb to injury only briefly. Should one be slain, her siblings place her body upon a bier of root and ivy, and bear it away to the hallowed halls beneath the Oak of Ages. There she slumbers away the weeks and months until the arrival of a new spring, where the riot of magic and life-energy restores her to vibrant existence. Only if her body is irretrievable or mutilated beyond all recognition does the fallen Sister’s spirit flee the mortal world, leaving her bereaved siblings to exact vengeance on her slayer.

And the Sisters of the Thorn can bring death in so many ways. They know all the poisons of branch and briar — not just those that cause a man’s bones to snap with his own desperate convulsions, but also the venoms that turn the blood to fire, bring intoxicating madness or cause the body to rot from within. So too are they versed in ancient curses, of words that can sap strength or cause their victim to fly into a rage so consuming that he slaughters his own kin without compunction. But such methods, though effective, are impersonal and provide little sport. The Sisters far prefer to kill with javelin or knife where they can, that they might see the fear fade from their victim’s dying eyes.