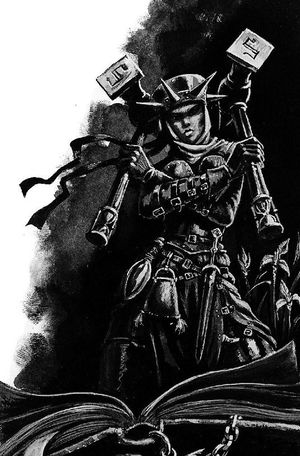 The Sisters of Sigmar are a Holy Order of Sigmar based in the city of Mordheim.[1]

Their full title was the Holy Convent of the Order of Merciful Sisters of Sigmar. They travelled through the Empire curing the diseased, tending to orphans and helping the sick and poor with both prayers and skill in herb-lore. [1d]

On the first day of 1999 IC (Imperial Calendar]], the Sisters observed in the night sky the sign foretold by the prophet Macadamnus of Greill that Sigmar would return to the city of his sisters on wings of fire. Whilst much of the rest of the city would fall into watonness and depravity, they continued in unending prayer to Sigmar and maintained their holy vigil. A year later a comet would strike Mordheim. [1a]

Magritta of Marienburg was brought up by the sisterhood and remained sympathetic towards them, but it was also said to be one of the reasons that the Grand Theogonist denied her claim to the imperial throne. [1d]

Many Witch Hunters however decided that rather divine grace or protection, the sisters had rather entered into a daemonic pact. [1b]

The Sisterhood withdrew to their fortress in the ruins of Mordheim, seeing that their sacred duty was to gather the shards of wyrdstone that were scattererd throughout the ruins. Those that they retrieved they stored in a great vault of blessed granite, guarded by their bodies and prayers. [1d]

By the early 2500's IC, the order still retained a convent in Altdorf, and although regarded with distrust by Witch Hunters and the general populace, their fierce dedication to Sigmar means they are grudgingly allowed to exist and operate in the capital of the Empire. They still seek to protect the people of the Empire from the corrupting influence of warpstone especially that brought from the cursed ruins of their former home in Mordheim. [2a]

As priests of Sigmar they could call upon the divine power of their god. [1c]

The members of the sisterhood were trained to master their bodies through the practice of the martial arts, in particular the use of the warhammer, the sacred instrument of their god. These were each blessed by the High Matriarch herself to make them more effective against unatural foes. Some Matriarchs and Sister Superiors were trained to use two effectively in combat. They also used Steel Whips which were as long as 12 feet in length and with which some sisters became extremely skilled. [1d]

Some members of the Order find themselves blessed by Sigmar and were able to resist spells, strike more powerful or accurate blows against Chaos or the Undead. [1d]

Troublesome or wayward Daughters of noble houses throughout the Empire were drawn to or sent to the Sisterhood. [1b][1d]