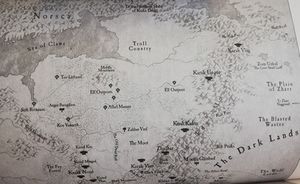 The Skarrenawi or Hill Dwarfs were Dwarfs who in the Age of Legends left the mountains and settled in cities aboveground. [1b]

Having departed the mountain holds to find fortunes and freedom, the Skarrenawi flouished due to trade with the Elves and humans from far off lands. [1b]

They created several well fortified cities in the Dwarf style, designed to be resiliant against attackers and the elements alike. Buildings were made of petrified Wutroth and stone. [1b]

As the War of Vengeance began, King Skarnag Grum of Kazad Kro finally slipped into complete madness and paranoia, being found naked in the gold vaults mumbling about his riches and how everyone wanted to steal it. [1c]