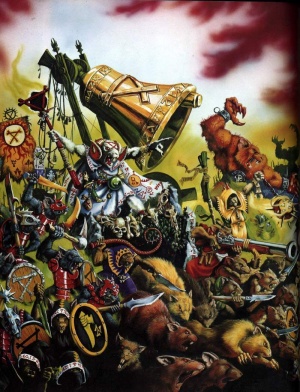 The Vermin hordes of the Skaven.

The Skaven are a race of humanoid rat-men, who inhabit the caves, tunnels, mines, and sewers of the Warhammer world. They control a vast Under-Empire which reaches from the Southlands to Kislev and from Estalia to the Far East.

The god of the Skaven is the Horned Rat, whose high priests form the Council of Thirteen. The direct agents of the Council are an order called the Grey Seers. Most of Skaven society is organised into innumerable clans, all of which are ruled by the Council. The four Great clans mercilessly dominate the weaker Warlord clans.

In the Warhammer world the Skaven inhabit its caves, tunnels, mines, and sewers. They controll a vast Under-Empire which reached from the Southlands to Kislev and from Estalia to the Far East.[2a]

Little is known about the origins of the Skaven race. However, it is probable that they were created in the ancient city of Kavzar by a mysterious stranger who completed the unfinished temple of the gods and hung a great horned bell from the top of the tower. As the bell rang for the thirteenth time lightning lit up the sky and dark storm clouds gathered. As the weeks went on the rain never stopped and the vermin of the city grew bigger and bolder until they overwhelmed the inhabitants of the city [1c] in -1780 IC [2c]

Over the next two hundred and eighty years or so the newly born Skaven race grew rapidly. There was pressure to expand the tunnels under the city, as the surface world was too dangerous for the Skaven. Eventually they began work on a huge device that they thought would open up large rifts beneath the ground for the Skaven to inhabit. Unfortunately for them the great warpstone-powered machine failed catastrophically - releasing huge waves of magical energy across the globe. The Worlds Edge Mountains - still recovering after the Great Realignment of the Slann - were hit hardest. Tunnels opened up beneath the Dwarf Holds through which lava from deep beneath the earth spilled up.[1c]

Back in Skavenblight, as Kavzar had been renamed, only a single building remained undamaged. The doors of the Temple of the Great Horned Rat opened and twelve grey-clad ratmen emerged. They called themselves the Lords of Decay and said that they were to lead the Skaven out of Skavenblight. The Skaven were divided into twelve groups, each of which set out to expand the Under-Empire. This is called the Great Migration.[1c]

From -1400 IC to -1300 IC the skaven wander across the world, establishing strongholds in Araby, the Darklands and the Southlands including what would become Hell Pit. Lord Viskrin instructs Clan Eshin to travel to Cathay and build their stronghold there. [2c]

The rest of Skaven history is largely divided into the various wars fought with other races or among themselves. The most important of these are:

Skaven are usually around four to five feet tall when they stand up straight, although the largest can reach six feet tall. Fur covers their bodies except for their ears, muzzles, hands and fleshy rat tails.[1a]

Fur colour indicates a Skaven's role in society. Most Skaven are brown or piebald. White or grey is rare and indicates leadership, intelligence and especially sorcerous ability. Those with black or dark brown fur tend to be the largest and the colour is considered the mark of a born killer, and most dark furred Skaven become elite warriors or assassins.[1e]

Skaven are twitchy, agitated creatures. Their metabolism allows them to burn energy at an incredible rate, boosting their agility and speed to unnatural levels. This effect also gives them an enormous hunger, which after heavy exertion can be so bad that the Skaven visibly weakens and dies. As a result the Skaven will feast on the dead of either side after a battle.[1a]

Female Skaven are rare and, at most, semi-intelligent but are capable of giving birth to huge litters very frequently. This means that the Skaven are probably the most numerous of all races.[1a]

Further information: Council of Thirteen and Pillar of Commandments

The Skaven are ruled by the Council of Thirteen, an assembly of their most powerful leaders, tested and approved by the Horned Rat. The council forever tries to impose its rule over the rebellious Skaven clans, often resorting to threats, terror, assassination and brutal punishment.Needs Citation

Skaven society is divided into thousands of different Skaven clans, all of which are subject to the authority of the Council of Thirteen. There are four powerful clans, known as the Great clans, which dominate the countless weaker Warlord clans.Needs Citation

The Great clans are highly specialised and have become an established part of the greater hierarchy of Skavendom. The Warlord clans, innumerable and expendable, also have a role in the greater scheme of things. The Clanrats of the Warlord clans make up most of the warriors in the armies of the Skaven, with the Great Clans lending their specialised support.Needs Citation

Warlord clans have a definite hierarchy, although the positions are in no way fixed. Skaven advance as far as their cunning, ruthlessness, treachery, ambition and strength take them. Skaven within the Clan constantly struggle to ascend as well as to defend their positions from would-be usurpers. At the very peak of each Clan is the Warlord. In some of the larger clans there will then be a second rank of lesser Warlords. The next level is formed by the Chieftains, followed by a warrior class composed of Clanrats and the elite Stormvermin. At the very bottom of Skaven society are the teeming masses of the Skavenslaves.Needs Citation

By order of the Council of Thirteen, the study of magic is restricted only to the Grey Seers and the Warlock Engineers of Clan Skryre.[1d]

Magic not tied to the worship of the Horned Rat is thought by most to be heretical, as suggested by the 169 commandments of their malign diety. Clan Skryre blend magic and technology - permitted by the Black Pillar of Commandments. [4a]

The Plague Priests of Clan Pestilens also have terrible powers of plague that are akin to magic but are gained through different methods.[1g] Clan Prestilens claim that the disease and plague is a gift of the Horned Rat and so their magic is also a divine blessing.[4a]

In addition, Clan Eshin has secretive Sorcerers, said to be gained from Cathay. They focuss on Shadow Magic - using both [[Ulgu and Dhar and when they die, their bodies boil away to nothing more than a greasy puddle. [4a]

Out of all the armies within the known world, no army could match the impeccable numbers of the Skaven race. When the Skaven abandon their secretive ways and emerge from their subterranean lairs, they do so for only one reason; to unleash vicious, inhuman and lightning fast warfare. It is a nightmarish scene, a ravenous horde, a chaotic and rolling tide of verminous ratmen. An individual Skaven warrior is of little match against any of the other races on a one on one fight. Without allies to aid him, a Skaven's cowardice would naturally make him flee from direct combat, only fighting if there is no other alternative except death. As such, to each and every Skaven, there is only one racial strength, and that strength is numbers.[3]

The god of the Skaven is the Horned Rat. Its sacred number is thirteen, and so thirteen is an important number is Skaven society. For example, there are 169 Grey Seers (13 × 13). Vermin Lords are Daemons of the Horned Rat, and can be summoned by a Grey Seer. This is often used as a threat to unruly Warlords, although no Grey Seer would dare to summon a Vermin Lord unless they absolutely had to.[1f]

Skaven society is a lawless world where the strongest and most cunning rise to the top, while the weakest are eaten or enslaved. Every Skaven is constantly fighting for supremacy, whether to advance, or to defend his position from would-be usurpers. Fights are usually not to the death, but any Skaven who is maimed will quickly be dispatched by the victor. Treachery is not seen as dishonourable in any way, indeed it is the traditional way of advancing in Skaven society.[1a]

The most important material used by the Skaven is warpstone. It is used as an ingredient in magic, technology, mutation, metallurgy, poisons and even their currency.[1b]

There are over 70 types of treaty-pledges or pact-marks which can be scratch-marked onto hides to document and agree temporary alliances between clans. It is true that no Skaven ever believes in the sincerity of them, the ritual of claw-marking these certificates is very important. Negotiations is key with all involved parties looking for telltale signs to aid them in understanding whether or not they actually have the upper hand. A clan that knows it has a treaty-pledge and an advantage is more likely to break trust first! [5a]

Skaven technology is heavily warpstone-based. Virtually everything they create has at least a tiny piece of warpstone in to increase its potency and deadliness.Needs Citation

The majority of Skaven weapons are developed by Clan Skryre. The Warlock Engineers of Clan Skryre create infernal engines of destruction, and then bind magically energy to the machine to increase its potency and destructiveness. Some of the most feared and deadly weapons created by Clan Skryre are the Warp-lightning Cannon and the Warplock Jezzails.[1a]

The Skaven of Clan Moulder are expert at breeding and mutating other living beings to create the perfect killing creature. Their Master Moulders create unnatural creatures to sell to other Clans. Some of the more infamous creations of Clan Moulder are the Hell Pit Abomination and the hulking Rat Ogres.[1a]