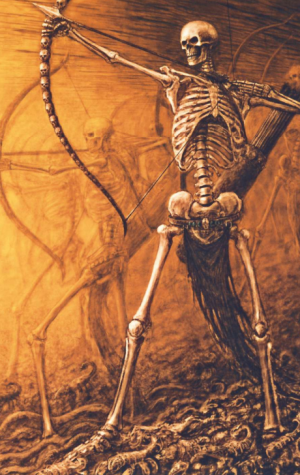 The Skeleton Archers of Nehekhara nock and loose volleys of arrows as they advance towards their foe without ever breaking stride. Raising their bows as one, the archers fire, reaching into quivers for another arrow before the first salvo has even reached the zenith of its trajectory. These Undead archers unleash great clouds of death that darken the sky moments before falling amidst the ranks of the enemy. Riders are pitched from mounts, and swathes of enemy infantry fall dead as bronze tipped arrows rain down upon them and pierce their bodies.[1a]

The kings of ancient Nehekhara knew the importance of delivering death from afar, and all of them maintained legions of highly disciplined archers. Loyal soldiers for all eternity, Skeleton Archers continue to practice their ways of war as they did in centuries long past. Awakened from the tomb pits of their king's necropolis by the magical incantations of the Liche Priests, every Skeleton Archer arises with a bow still clutched in one hand and a quiver of arrows held in the other.[1a]

There was a strong tradition of archery in ancient Nehekhara, and hunting was a popular sport amongst young princes. However, upon reaching adulthood, a prince was expected to leave behind such pastimes and devote his life to ruling his people. It became tradition for a newly crowned king to honour the greatest marksmen amongst his legions with his royal bow. This chosen warrior was bestowed the title of Master of Arrows, a position that held much prestige among the common soldiery. However, it was said that should the Master of Arrows miss his target the first time he fired the bow on the field of war, his life was forfeit - such was the punishment for betraying the king's trust.[1a]

Skeleton Archers will relentlessly pursue their opponents, for hundreds of leagues if needed, loosing a volley of arrows every time their retreating foes re-enter range. Whilst their enemies will grow weary, the Undead warriors no longer have such concerns and will only pause in their advance when the last of their quarry lies dead. Surrounded by the arrow-pierced bodies of their slain enemies, these Skeleton Archers will then stand perfectly still, awaiting the orders of their king. If that order is not forthcoming, they stand motionless and forgotten beneath the glare of the desert sun, until they are buried by the shifting desert sands.[1a]

Every arrow fired by the Skeleton Archers of Nehekhara has been blessed by Asaph, the goddess of vengeance and magic, so that they seek out their foes with unerring accuracy. When loosed, these arrows swerve in mid-air, darting towards their prey with the speed of a striking snake. The ritual bestowing each arrow with Asaph's blessing is long and arduous. The wooden shafts are inscribed with incantations using the claws of dune scorpions and the black feathers of desert vultures are used to fletch them. The most important part of the ritual is performed by chanting acolytes in the heart of Asaph's sacred temples, where bronze arrowheads are cooled in the blood of a hundred sacrificed serpents.[1a]

Skeleton Archers are unencumbered by the large, heavy shields of the Tomb Kings' other legions, allowing them the freedom needed to fire their long, curved bows. This leaves them with little protection against the swords and axes of their enemies, but any foe wishing them harm must first cross the killing ground, weathering a hailstorm of lethal arrows every step of the way. Only the most heavily armoured of foes can withstand such withering salvos. Less protected targets may instead turn and flee from the onslaught, but once an enemy has entered the sights of Skeleton Archers, the Undead will not stop until their foes have been killed.[1a]