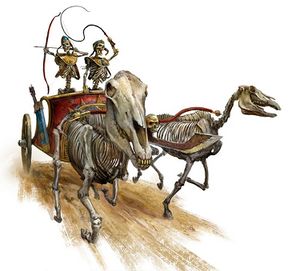 The Chariots of the Tomb Kings are the pride of the army and are excellent at fighting on the wide open sand dunes of Nehekhara.

The Nehekharans were the first human empire and as such the first to domesticate horses and use them in battle. [4a] The first chariots were built during the reign of Settra and were instrumental in his original conquests of the lands of Nehekhara.

The chariots of the day were light and fast and drawn by pairs of horses. They fought in massed groups and we considered to be the elite of the army. They were only used by the most powerful as only they could afford them. Also only the rich could afford to train the horses to fight in pairs. [4a]

Often they were entombed along with their masters and kings besides the pyramids of the Tomb Kings, ready to serve again upon their awakening. Now, they not only trample all under foot, but they also cause fear as the bones of a pair of long dead horses charge across the battlefield. [4a]

The biggest fleet of chariots was constructed during the reign of King Alkhazzar I and used by Alcadizaar to defeat Nagash when he first attacked.