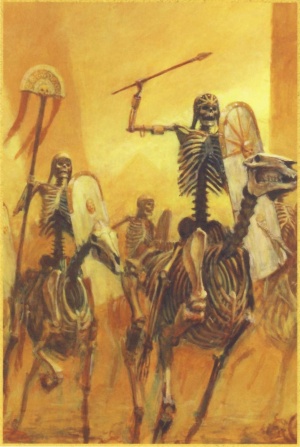 Skeleton Horsemen are the main Tomb Kings cavalry. [3a]

Their main role on the battlefield is to scout ahead and harass the enemy with their archery, fighting counterpart light cavalry should they be encountered and are often the first element of a Tomb Kings army to engage the enemy. [3a]

Cavalry were a late addition to the armies of Nehekhara with horses requiring a lot of water to support ensuring that cavalrymen were a elite element. To be inducted into their ranks, a warrior would need to have slain at least a dozen foes in battle and then they would be drilled by the Master of Horses. Often senior warriors would become part of the council of war of their ruler. [3a]

Horse Archers were originally nomadic tribesmen hired as mercenaries it was Rakaph III of the Second Dynasty who made them a permenent part of his armies granting them the freedom of the great desert in exchange for an oath of service. Other kings quickly followed his example. [3a]

Likened to the angry desert wind, the horse archers of Nehekhara are relentless, firing devestating volleys of blessed arrows into the foe before wheeling to escape any possible retribution. As the enemy begin to reform, the Horse archers strike again. [3a]

Skeletal Horsemen are usually equipped with a spear and heavy shield, crushing the enemy with a sudden charge. This kind of support is entirely different from ranged harassment and it requires a different kind of tactician. Because of this, so-equipped skeletal cavalry is led by a Master of Horses, not a Master of Scouts as Horse Archers are.[3a]