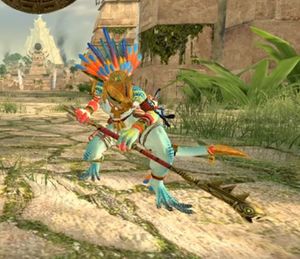 Some selective few Skinks that come from special spawnings are able to use the Winds of Magic and so become Skink Priests. They also serve as the attendants for the Slann. [2a]

The Slann are not to be disturbed except in the direst of times and so the Skink Priests make the majority of decisions for the whole of Lizardmen society. [3a]

They study the ancient writing but also take a proactive role in ensuring that the appropriate prophecies come to pass for they are impatient beings. If a Slann notices these activities they often put a stop to them and may even censor them. [3a]

The Skink Chiefs take their orders from the priests. [3a]

Skink Priests channel the fury of nature itself and unleash at the enemies of the Lizardmen. The sky above roars as lightning bolts strike from the heavens, smiting whole regiments in a flash of arcane power. They can act as a conduit for the Slann, all of whom are powerful telepaths, to direct their spells through. [3a]