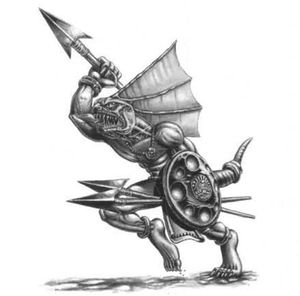 Skink Warriors may be used to assist the Saurus in defending their Temple-Cities.

Some Skinks who gain enough experience in combat become Skink Braves, they are good warriors, quite capable of leading an entire regiment of Skinks. They are distinguished by having a bronze ring on top of their crests. Skinks with even more experience become Skink Chiefs, great tacticians and warriors, who are capable of leading an entire Lizardmen army in the name of Old Ones.

Skinks marked by the Old One Sotek with his red mark are more warlike than others.

They are more likely to fight with poisoned Blowpipes or Javelins than with hand-to-hand weapons. Sometimes - especially in the Southlands - Skinks also utilize short-bows. Generally Skinks prefer - if forced to - to fight as skirmishers. When they form rank-and-file regiments, they are often accompanied by Kroxigors.

In the Southlands they have been forced to fight more conventionally due to the lack of Sarus and form cohorts that fight in the line of battle. [2b]