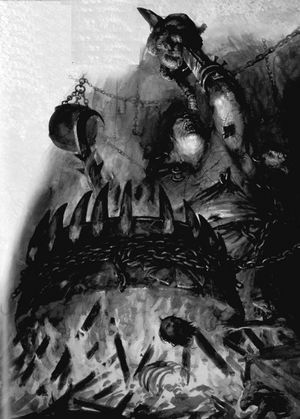 Skrag the Slaughterer is the legendary Prophet of the Great Maw also known as the Gore-Harvester and the Maw-that-Walks. [3a]

Skrag the Slaughterer was initially a respected Slaughtermaster under the Arch-Tyrant Bron Rockgrinder. However, he made a mistake of slaughtering and cooking the Tyrant's pet Gnoblar, a crime for which he lost his hands which were devoured by Bron and who ordered his cauldron chained to his back. [3a]

After that, Skrag was banished into the same warpstone labyrinths that the future Gorgers are thrown at birth. He was expected to provide a solid meal for the degenerated creatures, but, as unlikely as it seemed, he was ferocious enough for the Gorgers to accept him. As soon as he gained their trust, he arranged them into an army and butchered the Rockgrinder and his entire tribe for the sake of the Great Maw. An offering this large didn't go in vain and he became a Prophet of the Great Maw, a living avatar of its ghastly will.[1][3a]

Being a Prophet of the Ogre God of gluttony, he has an almost unrivalled authority and thus often musters Ogre hordes for war. He will usually take some younger Butchers as his apprentices, allowing the horde to really benefit from the Maw's powers, and he will invariably summon his Gorger allies, the unexpected numbers of ferocious half-beasts breaking the hostile army's back.[2]

Skrag appeared in a early Warhammer boardgame in White Dwarf as a Ogre follower of Malal being attacked by the Chaos Dwarf Spikes Harvey-Wotan. [5a]