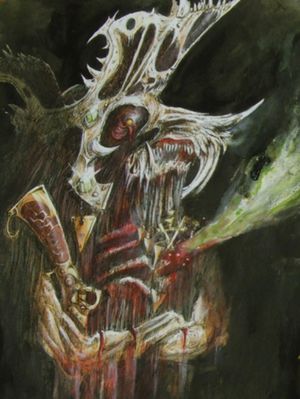 Skretch Half-Dead is a Pirate Warlord of Skaven Clan Skurvy. [1a]

Having backstabbed is way to a captain, he led a small fleet from Spineport raiding Tilea. [1a]

Seeking more warpstone, Skretch sialed in search of the Galleon's Graveyard but encountered a vast Orb Leviathan that lured his ships and then devoured them. However Skretch and some of crew survivied, at least for a time and fought back, devouring first the monsters heart and then the rest of its insides until it died. Still trapped, the skaven slowly died and the giant corpse drifted into the Graveyard. [1a]

It was spotted by Count Noctilus who sought to animate the vast beast, but also brought back the Skaven to unlife and who perhaps because of the warpstone, retained their free will. They rebuilt their machines within the monster and strapped Warp-lightning Cannons to its ribs, concealed behind folds of flesh. When the vampire sought to command them, they sounded their Screaming Bell to drown him out and attacked his own ship, the Bloody Reaver until he called for a parly. [1a]

Offered warpstone for service, Skretch agreed and joined the Dreadfleet with his vessel, now known as the Skabrus. [1a]