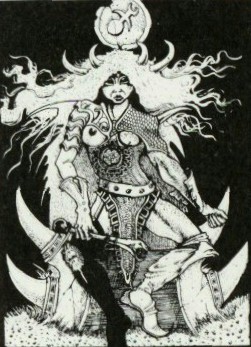 Slaanesh the Prince of Chaos

Slaanesh is the Chaos god of lust, excess, pleasure, perfection and hedonism.

Slaanesh typically appears in a form which is male on the left side and female on the right, with two sets of devilish horns growing from its head. It can however assume any form; male, female, hermaphrodite or asexual, but prefers male bodies.

The name of Slaanesh derives from his Dark Tongue name of "Slaaneth"[1], from which also derives the other names he is known by. Slaanesh is known as Loesh the Serpent to the Tokmar of the Eastern Steppes and as Shornaal the Prideful to the Skaeling of Norsca, while in the more civilised lands of the south he is known as the Dark Prince of Chaos, Prince of Excess or Prince of Pleasure.

Slaanesh is opposed to Khorne, whose demand for bloody self-sacrifice is completely at odds with Slaanesh's principle of a life of self-indulgence and pleasure.

Slaanesh's sacred number is six, and his symbol is a combination of the traditional symbols for male and female.

Although motivated more by self-indulgence than in furthering their power, the Slaaneshite cults flourish in number, Slaanesh's principle of indulging in every whim and vice making him the most popular of the Chaos Gods in the Old World.[2]

Slaanesh's followers are found in large cities and towns of the civilized lands, as well as among the Northmen of the Chaos Wastes.

Slaaneshi warbands are especially feared for their excessive practise of slave hunting, looting and acts of rape/murder. Followers of Slaanesh in the far north tend to make great use of various drugs - especially hallucinogenic fungus and roots - to lose any fear of pain or getting wounded before entering a battle.

The Elves had their own cults of Slaanesh a long time ago - the so-called Cults of Pleasure, which led to the long Civil War, the creation of the Dark Elves and their subsequent exile in Naggaroth. During the Storm of Chaos Dark Elf and human followers of Slaanesh allied and started a large scale invasion of Lustria to fight the Lizardmen and loot the artifacts of the Old Ones. This unholy alliance was led by Morathi, the hag queen and mother of the Witchking Malekith.

There are followers of Slaanesh among the ranks of the Beastmen as well. Bestigors that are dedicated to the service of the Prince of Pleasure are called Slaangors.