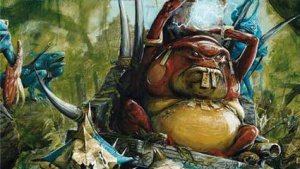 The Slann Mage Priests are fat toad or frog-like creatures who are the leaders and priest-caste of the Lizardmen. They were the original servants of the Old Ones. [1a]

Slann are large, corpulent toad-like beings. A Slann's bloated body can take a fair beating, and their magical energies lend them some protection, however overall they are physically frail. When in battle, Slann do not walk or ride beasts but are instead born aloft on floating palanquins imbued with magical power. This is partly to avoid setting foot on the ground which has been tainted ever since the first Coming of Chaos. Slann are essentially immortal and have never been known to die from old age.

However none have been spawned since the fall of the Old Ones. As a result the Slann are a dying race, unable to replenish their numbers. Each time a Slann dies it is a great loss for the Lizardmen. Due to their great age, even the youngest Slann are many thousands of years old and can remember a time long before the rise of Elves or Humans. Only a few hundred Slann remain in the world and they regard the world with a cold, alien intelligence. [1a]

The Slann were created to assist the Old Ones with their Great Plan. More than half of them were killed during the Great Catastrophe. [3a]

The Slann are, on average, the most powerful wizards in the Warhammer world, capable of killing a foe with a wave of their hand or destroying a city with but a nod of their heads. Even the lowliest Slann is more than a match for the greatest wizards of other races. Only the most powerful of Elf mages can compare.

In hidden crypts hidden deep within the oldest temples, lie the sacred mummified remains of deceased Slann. The spirit of a dead Mage-Priest often hovers near its dried body-husk, and magical energy pulses through the air around the corpse. It is unknown how much these Slann spirits are able to manipulate the corporeal world, though many prophets believe that their influence is substantial, if not always apparent. The most famous Relic Priest is Lord Kroak whose mummified body is sometimes brought to battles in times of dire need.

The Slann were created in five spawning by the Old Ones, each with their own task to play in the Great Plan: [1a][3a]

All Mage-Priests can receive and transmit telepathically with other distant Slann and so rarely speak, with those of the Fifth Spawning being the most vocal, speaking several times a day. [1a]

As such, Slann spend most of their time in deep meditation, communicating telepathically with each other, attempting to gain vision of the future and interpret the will of the Old Ones. The known world is only a small element of the ancient plan that the Slann still try to serve. [1a]

During this they are attended by the Skinks and carefully guarded by the mighty Saurus Temple Guard. In these states of serene contemplation a Slann will appear dead to the casual observer, not moving for centuries and only speaking to mutter some half understood prophecies that the Skink Priests must decipher the true meaning of. While the Lizardmen obey the Slann without question, the fact that Slann spend most of their time in meditation means that the day-to-day running of Lizardmen society is often left up to the Skinks, and the commanding of armies to the Saurus.[3a]

Since the Great Catastrophe, the Slann have not set a single toe on the earth to avoid their thoughts and magical power being disrupted. Instead when they must leave their pyramid-temples they travel upon palanquins. [3a]