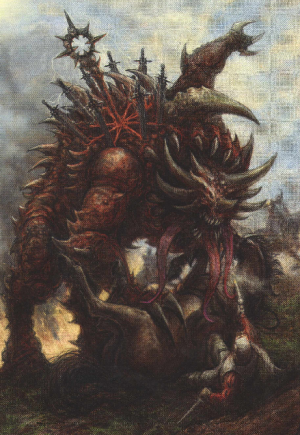 A Slaughterbrute is a hulking monster of muscle and aggression. Such a creature cannot be broken by conventional means, and those foolish enough to try are torn apart and eaten for their efforts. Instead, a Slaughterbrute’s mind is enslaved, through magic, to that of a Chaos Champion. The binding ritual for a Slaughterbrute is long and arduous. First, the beast is bound with magical chains, its flesh carved with runes of domination and branded with sigils of enslavement. Finally, daggers are soaked in the blood of the champion who would be the beast’s master. These are then driven deep into the creature’s spine, at which point its thoughts are immediately subsumed with a malign intelligence that is not its own.[1][2][3]

Slaughterbrutes possess four front arms of differing sizes, a muscular body, a triplex tongue, whilst its massive head shows a cluster of eyes and multiple rows of teeth. It's skin is chitinous, creased and spiked, and the creature stands on hoofed feet. Chaos icons, a ritual dagger of binding, and various weapons skewer into its back. Some have no tongue; instead having a grimacing maw and growths protruding from its face.[3]

Though some champions control a Slaughterbrute through the movement of a marionette, most are able to manipulate the creature through surpassing force of will -- controlling its every action as if they were their own. Under such dominion, a monster that would otherwise lash out with blind fury, instead strikes with the skill of a warrior born. Every sweep of its over-muscled arms leaves behind a trail of broken and mangled bodies; every bite from its massive jaws rips another enemy in half. As terrifying as a Slaughterbrute is, it is the sight of so massive a creature feinting and parrying blows that most unnerves their foes. Worse still, as a Slaughterbrute carves through entire regiments, the unmistakable sound of laughter can be heard rum bling from within the beast’s throat, a throat that should by all rights be roaring with bestial fury.[1][2][4]

The combination of raw strength and pure skill is a mighty boon for the Followers of Chaos. However, if the Slaughterbrute’s puppeteer should ever be slain, the magical shackles binding the monster will sever. Unbound, a Slaughterbrute reverts to its natural state, and a red haze descends that makes no distinction between friend and foe. To a Slaughterbrute free of enslavement, everything it sees is prey to be crushed, stomped, and ripped apart. The only way to halt the resultant rampage is to hack the beast down, and few warriors are up to such a task.[1][2][4]