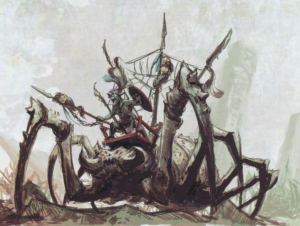 Snagla Grobspit is perhaps one of the most legendary Forest Goblin to have ever terrorize the forested woodlands of the Old World. He and his mob of spider riders, the Deff Creepers, were at the forefront of every greenskin victory.

It was Snagla who rode straight into the line of Handgunners and broke the Empire's flank, leading to what is now known as the Forest Road Massacre. It was the stealthy Deff Creepers who silenced the central watchtower, leading to the fall of the walled town of Glomstadt. His foes whisper that Snagla and his Spider Riders can creep right out of the very shadows, and perhaps it is true.

Snagla Grobspit is a woodcrafty Spider Rider, able to sneak around enemy armies and launch attacks from unexpected quarters. While all Forest Goblins wail a high-pitched cry as they charge, none can match the horrible undulating cry of Snagla and his mob. Snagla has a knack for picking his way through dense cover and scuttling unseen over the forest canopy. Once the Deff Creepers have worked their way into the most advantageous position, they will dart out of hiding to ruthlessly destroy their target.

When men from the Empire first cut their frontiers deeper in to the surrounding forests, they unwittingly began the bitter War of the Drakwald that continues to this day. The fractious Forest Goblin tribes who dwelt in the hinter regions of that sprawling woodland ceased their internal strife to unite against the enemy. Unbeknownst to the men of the Empire, their deepest forays had encroached dangerously close to the most holy of sites to the Forest Goblin tribes, the sacred lands known as the Black Pit, or the Valley of Many Eyes. To stray near that dark and web-strewn place is certain death, for the Forest Goblins will stop at nothing to destroy any interlopers who dare approach it. At first, forest patrols and huntsmen disappeared at an alarming rate. The deep woods were always treacherous, but the men of the Empire were savvy enough about life beneath the boughs to understand that something terrible was brewing. They didn't have to wait long, for soon the Forest Goblin raiding parties mobbed together to form armies. Emboldened by their numbers, the Forest Goblins left the confines of the woods to mount fierce attacks on the nearest human settlements. In turn, fresh troops marched out from the Empire's cities, eager to push the boundaries of civilisation further. Many ambushes and large battles followed, most fought entirely beneath the gloomy canopy.

Of Snagla's tribe, the Redvenom Forest Goblins, little is known. They were destroyed early on in the battles in the Drakwald, for they dwelt on the edge of the Gnarlwood – the lands that were first cleared by the Empire soldiery. If there were any survivors they never returned from out of the woods. When Snagla returned to find his camp in ruins, it is rumoured that the Spider-god spoke to him. All that is known for sure is that Snagla took the fangs from his tribe's cannonball-blasted Arachnarok Spider. With these he fashioned a throwing spear and a great spiked club. When the Forest Goblins first began to gather, seeking to push the invading humans farther away from the sacred Black Pit, Snagla and his Deff Creepers mob turned up, eager to join the fight. They alone still wear the distinctive striped feathers and facepaint associated with the Redvenom tribe. Snagla and his mob have a penchant for the feathers worn by many Empire troops. After battle, the Deff Creepers soak these feathers in the blood of their former owners and wear them as grim trophies upon their weapons and shields. With their status still growing, Snagla and his mob travel throughout the vast forest, ever eager to join an battle they can.