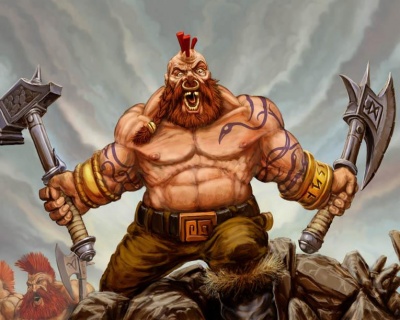 Snorri Nosebiter is a Dwarfen Slayer and adventuring companion of Gotrek Gurnisson and Felix Jaeger. He is first introduced in the novel Daemonslayer when he and Varek arrive at an inn for a rendezvous with Gotrek. Along with Gotrek, Snorri was one of the few survivors of Varek's uncle Borek's first expedition into the Chaos Wastes to search for the lost Dwarf-hold of Karag Dum and is an old friend of Gotrek's.

Snorri joins Borek's second expedition to the Chaos Wastes, this time flying over them in the airship Spirit of Grungni designed by genius engineer and fellow dwarf Slayer Malakai Makaisson. Along with Gotrek and Felix Snorri descends into an ancient ruin in the Wastes while the airship anchors for repairs after being damaged in a storm and the trio are forced to fight their way out, escaping at the last minute from a vast army of beastmen. Snorri joins Gotrek, Felix and Varek in descending into Karag Dum and fighting their way through bands of beastmen before locating the dwarfen survivors. He fought in the battle against the Bloodthirster and was seriously wounded by a backhand blow of the daemon's axe, but managed to survive through his dwarfen toughness.

Snorri continued to accompany Gotrek and Felix on their adventures, joining the expedition to slay the dragon Skjalandir and travelling to Praag to help defend the city against the Chaos army of Arek Demonclaw. He was almost killed in combat with the Chaos Lord, only just managing to block the would-be fatal blow with both his axe and hammer. After the siege broke he travelled south to Sylvania with Gotrek, Felix, Max and Ulrika and helped to bring down the Vampire Count Adolphus Krieger. However, he and Max were separated from Gotrek and Felix shortly afterwards when a wormhole the duo entered rejected them, throwing them backwards into the snow.

Gotrek and Felix did not encounter Snorri again until many years later when they came across him travelling with a pair of younger Slayers. By this point Snorri, who had always been slow and somewhat forgetful, had become far worse and had forgotten the reason he became a Slayer, a grave sin that would prevent him joining his ancestors upon death unless he managed to remember and find his doom. It is his current goal to reach the Shrine of Grimnir at Karak Kadrin and pray for his memory back.

Like most dwarfs Snorri is short and muscular. One of his ears is badly cauliflowered and the other is gone completely, leaving only a hole in the side of his head. He has a short red beard like all Slayers, but his traditional crest is vastly different. Instead of a red crest of hair, Snorri has three large nails in his head. It is not known exactly how he came to have nails pounded into his skull but it may have affected his thinking processes as he is very forgetful and rather stupid. The effects of this may have worsened over the years as by the time Gotrek and Felix are reunited with him he has become incredibly forgetful to the point of forgetting the reason he became a Slayer, probably the most traumatizing and defining moment of his life. In battle he wields a small axe in one hand and a hammer in the other, raining vicious blows on his opponents.

Despite of perhaps because of his lack of intelligence Snorri is jovial and friendly, in contrast with Gotrek who is grim and mistrusts most people. He respects Felix because of his position as Gotrek's rememberer and considers him a friend. Like Gotrek he is fearless in the face of danger and actively seeks it out to fulfil his vow to find his doom in battle, and is gleeful at the prospect of any fight. Also like Gotrek he is a heavy drinker and the pair often compete in drinking contests. He is one of the few living souls Gotrek considers a friend and the pair often indulge in good-natured bickering. He always refers to himself in third-person.

Prior to his loss of memory Snorri was able to recall that the reason he took his Slayer vow had to do with the memory of returning home to find a dwarf woman and child dead, and the suspicion that his absence had been due to alcohol. In a vision seen by Felix Snorri was shown falling in battle with a horde of orcs, though whether this will ever come to pass or not cannot be known.