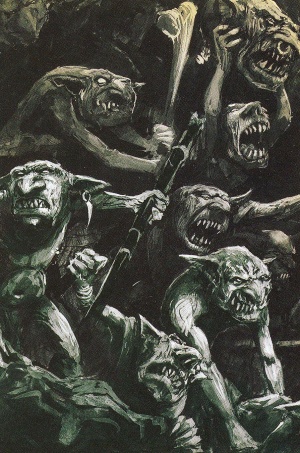 A horde of Snotlings.[1]

Snotlings are the smallest and perhaps the most dull-witted of the Greenskin races.

They possess pea-sized brains and behave very much like extremely enthusiastic and uncontrollable puppies. Most Snotlings only grow as high as a Man's ankle and have been known to infest both Orc and Goblin settlements, always scavenging in the heaps and dung of the camps rubbish, and stealing anything which is not nailed down. Snotlings have a nasty tendency to often nab unwanted cast-offs, bits of scrap, trinkets or shiny metal and hide these treasures in a secret nook or hiding spot. Orcs tend to look upon their much smaller cousins with a certain degree of affection, often treating them as wayward and mischievous pets. Some Orcs in a tribe might try to capture one or two of these little creatures, feeding them small scraps of food, and training them to do tricks and menial task. The brightest of the Snotlings would do simple stuff like playing "Fetch" or do extremely simple labor such as carrying equipment or scratching off hard-to-reach scabs for their Orc owners.[1]

However, due to their small brain, they are not capable to do any real labor and as such will be replaced by their larger Goblin cousins to do their work for them. It is widely known that the Goblin race gravely despise their Snotling cousins. A Goblin finds it difficult and annoying when they try to sneak about without a mob of gleeful snotlings following him. Worst yet, these runts have a nasty habit of squeal-fully pointing out the guilty Goblins within the tribe, often showing off the hiding places of appropriated goods or murder scenes. As such, the Snotlings, in order to escape the wrath of their Goblin cousins, would often run between the legs of their protective Orc owners, which only infuriates the Goblins to no end.[1]

Rarely a Snotling will arise to become a Snotling Warboss and lead a small horde.[4a]

When Orc and Goblin tribes go to war, they would often be accompanied by a huge horde of armed Snotlings. These Snotlings are no more than a rag-tag mob of enthusiastic Greenskins armed with little more than simple junk they found in the camps of the Greenskins. There is a broad spectrum of what these little monsters consider weapons, some would take small broken branches, others would grab small eye-catching mushrooms or bits of bone as weapons. Occasionally though, a Snotling would find a real weapon to use such as a pointy stick or a small dagger. Snotlings want to do their part in any battle, but are not an effective fighting force. The undersized Greenskins exhibit extra vigor when fighting while their larger brethren can see them. More often then not however, their foes feel little harm, with the Snotlings suffering casualties by the droves. However, in large mobs they can overwhelm a single individual with the weight of sheer numbers alone, but apparently still be mowed in the battlefield all the same. Orcs may feel a small portion of affection or pity for the loss of their favourite "snotty" but these affections are just as short-lived as a Snotlings life-span.[1]