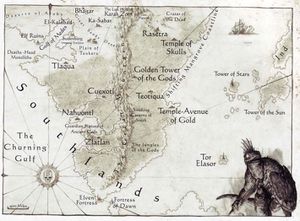 Map of the Southlands

The Southlands is a continent to the south of Araby. It is believed to have once been attached to the continent of Lustria; as they share many species of plants and animals. However, they are now separated by the Great Ocean, or the World Pond as it is known to the Lizardmen.[3a]

The temple-city of Zlatlan is said to have been founded before the continents were split apart by the Old Ones before the Great Catastrophe. It is not known when the other temple-cities were built. After the Great Catastrophe only the younger Slann of the fourth or fifth generations were left.2 p72 Following the sinking of the temple-city Chupayotl in Lustria in -3894 IC the Southlands became completely cut off from the Lizardmen in Lustria.3 p11 p24

It is thought that the Lizardmen of the Southlands may have made contact with the Nehekharan civilisation during its formative years. They could have been attempting to construct a human civilisation based upon the Lizardman model. This can be evidenced by the similar practices of pyramid builidng, mummification and cities ruled by priest kings. Eventually, when the Slann realised the direction that Nehekara was going in, they cut off all contact and returned the jungle.[2c] However, in 1150 IC there was at least one Skink Priest of Zlatlan that spoke the ancient language of Nehekhara.[2a]

The majority of Skaven Clan Pestilens left Lustria in around 50 IC and arrived in the Southlands.4 p30 Following the outbreak of the first Skaven Civil War they conquered several Southlands Clans. Eventually the Council of Thirteen lost control of the entire continent to the Plague Lords.4 p22-23 Eventually, after five centuries in which the Southlands were devastated, the Civil War ended with Clan Pestilens getting a place on the Council of Thirteen.4 p30

The first humans to probe along the coast were Arabyan merchants search for spice, gold and other valuable commodities. In an attempt to avoid conflict with the Elves they tried to find a land route across the continent.[2c] The first to make contact with the Lizardmen, who the Arabs call Al Saurîm, was the trader and scholar Ibn Jellaba, who set out from Ka-Sabar in around 1150 IC. He penetrated the jungle and met with the Lizardmen of Zlatlan. His requests for an overland trade route were denied by the Slann, although his charts and maps were copied to help the Mage-Priests understand the shape of the world better. Ibn Jellaba accompanied the Lizardmen on a raid into the Land of the Dead to retrieve the mummified body of a captured Slann, before returning home with all the treasure captured by the raid.[2a]

The Emperor of Cathay learned of the wealth of the Southlands and sent expeditions to explore the coastline, eventually culminating in the great armada of over a thousand war junks and one hundred thousand men despatched by Emperor Wu in 1690 IC. The fleet was struck by two typhoons, one as it set out and one as it lay at anchor along the coast of the Southlands. Only one man, the captain Yin-Tuan, was found alive.[2c]

Savage Orcs accidently opened a great tear into the Realm of Chaos in 2150 IC summoning a horde of Daemons that surge out to attack them. As battle raged, a third army of Lizardmen arrived and attacked both - unsure of what was happening, the Orcs destroyed both armies. They then built a great idol of Gork above the the ancient ruins which seals the breach. [1a]

The north of the Southlands is a barren desert, which borders Araby and Nehekhara, the Land of the Dead. South of the desert and west of the mountains lies the Plain of Tuskers. Most of the rest of the continent is thick jungle, bisected by the Worlds Edge Mountains.[3a]

The Lizardmen have lived in the Southlands since the time of the Old Ones. They have five temple-cities hidden in the jungle. Only the younger Slann of the fourth and fifth generations still live in the Southlands and the whole continent is cut off from the older Slann in Lustria, causing Lizardmen society to devolve. Also, the spawnings of Saurus are greatly reduced, and those few that do spawn are usually destined to be Temple Guard. This is seen by the Slann as just a part of the Great Plan of the Old Ones.2 p72

As a result of the low numbers of Saurus it falls to the Skinks to form the main fighting force of the Lizardmen. However, the Skinks of the Southlands are trained to fight by the Saurus so are usually more ferocious than their counterparts in Lustria.2 p72 p74 There are even some Skinks who ride the Horned Ones into battle!2 p75

Due to the isolation that the temple-cities of the Southlands have had compared to Lustria, their plaque sequence is almost complete. This may make the predictions of the Southlands Slann much more accurate than their Lustrian counterparts. An example is that the Slann of the Southlands knew of the coming of Sotek before Clan Pestilens washed up on their shores. Sotek encircled Zlatlan to protect it from the vengeful ratmen, who instead set upon their own kind. The Slann believe that the Skaven were sent mad by the magic of Sotek![2c]

Armies of the Southlands Lizardmen

Saurus are uncommon and erratically spawned in the Southlands and only a few younger Scar-Veterans remain to guide them in battle. Skinks have had to become more war-like to defend their cities, with some riding Horned Ones, a more aggressive form of Cold One.[3a]

In around 50 IC Nurglitch led the majority of Clan Pestilens out of Lustria to the Southlands.4 p30 During the first Skaven Civil War they defeated all the other Skaven Clans on the continent.4 p23 Now the temple-capital of Clan Pestilens is hidden in the jungle. Every thirteen full turns of Morrslieb the Plague Priests must travel to the temple-capital to present their Book of Woe to the Arch Plaguelord Nurglitch.4 p44

The High Elves of Ulthuan have a stronghold known only as the Elven Fortress on the southern-most tip of the Southlands. They maintain the Fortress of Dawn on an island to the south-east of the Elven Fortress. The fortresses are supposedly there to protect the sea routes to Ulthuan, but even their dragon ships are unable to stop reckless treasure hunters landing on the beaches of the Southlands.[3a]

The Dwarfs have a stronghold on the southern tip of the Worlds Edge Mountains in the Southlands. It is believed to be called Karak Zorn, although nothing has been heard from it for many years. It is possible that only the Lizardmen of the Southlands know of its fate - but if that is the case it is unlikely that the Dwarfs will ever find out what happened to Karak Zorn.[3a]

Long ago all Orcs lived in the Southlands. As their numbers grew they migrated north, learning metal working from the Chaos Dwarfs.6 p21 Those that remained in the Southlands became Savage Orcs, primitive even by greenskin standards.5 p11

In Warhammer Armies: Lizardmen (5th Edition) the Southlands are referred to as the South Lands [2a]