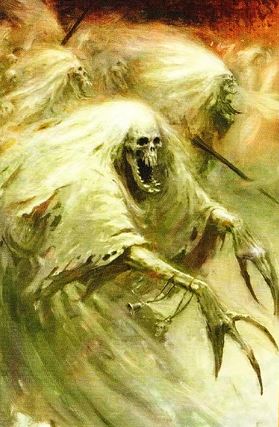 A Spirit Host is a collection of spectres, shades, spirits and ghosts of the dead [1a] often those of murdered innocents or those with an unfulfilled oath. [2a]

The arcane rituals required to bind them into organised hosts are secret and known to only a few Vampires and Necromancers.[1a] In Sylvania, the priests of Morr were driven away by Vlad von Carstein who ensured as a consequence that those who died in his land could not pass over to the afterlife. [2a]

These lost spirits manifest as a swirling mist of mournful, wailing faces and chill grasping hands and talons which can drag away part of the victims soul with a mere touch.[2a]

Those knowing the rituals are certain to use them, for the spirit hosts are ethereal creatures and all earthly weapons, even as formidable as knightly lance or cannonball, will just go straight through them, doing no damage whatsoever. Even better, the spirits glide above the earth, ignoring any terrain beneath them, easily outgoing the earth-bound infantry and even cavalry, should the latter encounter particularly challenging ground. [1a]

On the other hand, it is possible to kill the spirits with magic or with magical weapons. Those who are lucky enough to possess them, will not find Spirit Hosts to be challenging opponents, because their combat prowess is average, with skill, power and magic-harm resilience being no higher than human. Also, their reactions are extremely slow; worthless for most, priceless for those able to hurt them.