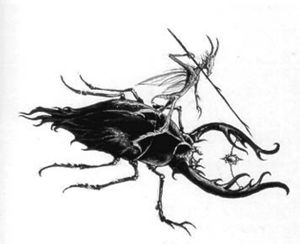 Spites are capricious and unpredicatable spirits of nature found in forests, especially Athel Loren. [1a]

They are tiny spheres of energy but can adopt a variety of forms.[1a]

Spites are as likely to lead a lost traveller to their doom as aid them although in times of peace they are mostly friendly and harmless, acting as caretakers of the forest and helpers. They frequently adopt an indivdual and play practical jokes on them but can also be very protective of their hosts. Easily provoked, when angered they shift to dangerouly aggressive forms. [1a]

The elves try to placate and distract them with shiny trinkets or food. [1a]