From Warhammer - The Old World - Lexicanum
(Redirected from Spites)
Jump to: navigation, search
Athel Loren is inhabited by many strange and powerful beings, many as ancient as the forest itself. In spirit form, these creatures are insubstantial and may appear as nothing more than flickers of light, although they can take physical form at will. In times of need these spirits can bind themselves to fallen branches or the trunks of dead trees, changing their shape and form to resemble a powerful shell capable of routing enemies and aiding the armies of the Wood Elves. Once the battle is over the spirits will leave the dead trees and merge back into the forest. Like the rest of the forest, the forest spirits are lethargic, slow and begin to hibernate during the long winter months. 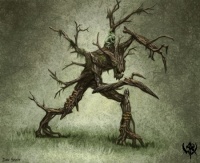 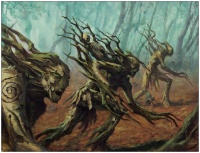