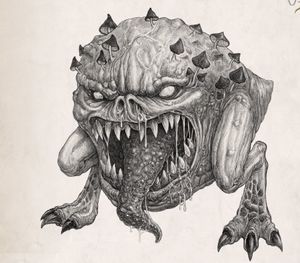 Squigs, or Cave Squigs are amongst the most deadly creatures to be found in deep caverns. They are a hybrid of fungus and flesh, with round bodies and enormous mouths.[2a] [3a]

Squigs can vary wildly in appearance, adapting to their environment. [3a]

Dwarf Loremasters in Karak Kadrin claim that Squigs originally sprung from the blood of Gork (or possibly Mork) where it was spilled on the battlefield long ago in a struggle against Grimnir. [3a]

Some especially reckless Night Goblins ride Squigs into battle. They have no control over fast the Squig moves, although they are able to guide the Squig towards the enemy. [3a]

The semi-mythical Great Cave Squig is even more ferocious than a 'normal' Squig. If one is captured it makes an excellent mount for the bravest Night Goblin leaders.[2a]

The Night Goblin chieftain Skarsnik has a pet Squig called Gobbla, who has a mouth so vast that it can swallow enemies whole.[2b]

The non-flamable squig oil is a remarkable lubricant, employed in the maintenance of a number of dwarf devices and firearms. [3a]