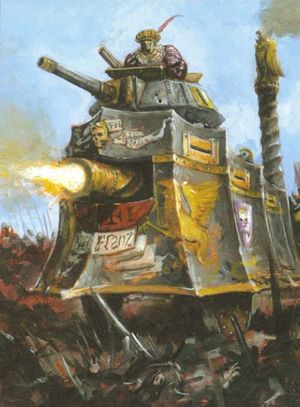 A Steam Tank in action

Steam Tanks are powerful war machines used by the armies of the Empire. [1a]

They were created by the College of Engineers, designed by its founder the famed genius Tilean inventor Leonardo of Miragliano. [1a]

After the inventor's death, the secrets of the Steam Tanks were lost with him and engineers have so far been unable to successfully construct any new ones. Only twelve tanks were built, all with varying configurations. Only eight Steam Tanks remain, the lost four having been destroyed during testing or in battle.

A promising reproduction was created by engineers in Nuln in 2499 IC, when the school and their Steam Tank prototype were razed to the ground under suspicious circumstances. [2a]

In the early 2500s, Reiksmarshal Kurt Helborg commanded that all Steam Tanks adopt the same weapons as the Conqueror within five years. [2a]

Some of the four lost Steam Tanks were captured by enemies of the empire like the Skaven, who transformed one of the tanks into a fiendish wyrdstone powered "rat tank". Another, very odd tank was reconfigured by the Halflings of Mootland, who named it Soup Tank "Kathleen" and utilized it against the forces of Marius Leitdorf, the Elector Count of Averland during an infamous rebellion.

A Steam Tank is powered by a pressurized boiler that siphons steam through pipes and pistons which drive the wheels. During battle the tank is commanded and driven by a Senior Engineer who manages and directs the steam from the boiler to the tank's mechanisms. Should too much pressure be allowed to build in the boiler, it may rupture with catastrophic effects. The commander must rely on his experience in interpreting the various noises to judge the pressure and avoid a explosion as he uses it to move his vehicle. [1a]

The best way of disabling or destroying a Steam Tank is by cannon fire, although the Steam Tank has been known to shrug off even that.

The war engines are somewhat unreliable, and only rarely can all eight be persuaded to run for a single battle.[1a]

There are many varied configurations of weaponry and machinery used in imperial steam tanks:

The thick steel armor plating of a Steam Tank makes it all but immune to lesser weapons such as arrows and crossbow bolts.[1a]

The most common steam tank variant is armed with a steam powered cannon in its hull and a steam gun mounted in its turret. Though the steam cannon is smaller than the cannons of the Imperial Gunnery School the maneuverability and protection of the steam tank more than compensates for the main cannons comparatively short range and diminished power. A conventional cannon would be impossible to use in the tank. [1a]

The turret mounted Steam Gun is used when enemies are close to the tank, as the weapon's very nature makes it very short-ranged. The Steam Gun shoots a cloud of searing hot steam upon anyone stupid or unlucky enough to be standing near. As can be surmised, armor of all kinds grants little more than a searing trap against this peculiar weapon.[1a]

The Engineer driving the tank is usually armed with a repeater pistol as a means of self-defence should the situation become dire enough. It may also be used as a deterrent against charging enemies, as the Engineer fires upon the attacking troops from the turrets hatch and retreats to the safety of the tank's armored hull.[1a]

It was also part of the Empire Army List for the game Warmaster.

The Skaven Rat Tank was used in a game of Warhammer Fantasy Battles: Skaven vs. Skaven.

The Soup Tank "Kathleen" was built by Chad Mierzwa and used by Matt Ward in a game of Warhammer Fantasy Battles: Halflings and Ogres vs. The Empire.

Recently a new, all plastic, model of the steam tank was released by Games Workshop.