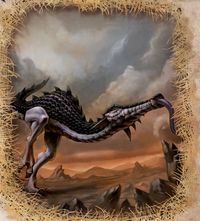 A Steed of Slaanesh

The Steeds or Mounts of Slaanesh are strange bipedal beasts ridden into battle by Daemonettes and favoured followers of Slaanesh. [2a]

A steed of Slaanesh is usually a two-legged beast with a tail, a silken mane, a short snout and a long tongue which is able sense the terrain about them. [1a] They are either ridden by the followers of Slaanesh, or used to pull chariots by those same followers.[3a]

Their long agile tongues are also able to taste the very souls of those that they face, each a unique flavour that they cannot forget and allowing them to track their prey relentlessly over vast distances. The Liver Malefic claims that they can even dance in and out of the ether at will. [1a]

As long as its rider lives, the Steed is not subject to instability. [3a]

The original description of steeds was quite specific as to the colouring of the creatures, specifying green hair; pale lavender bodies and pastel yellow with read mottling for the head, tail and underside; and an electric blue tongue. The description is a strange mixture of horse and ostrich--two long, feminine legs with glossy hair; a mane of hair running down the back of the creature; a long tubular snout and a long, constantly moving tongue. [2a]

In Armies of Chaos and Realm of Chaos, the skin colour is described as vivid yellows, reds and blues, although the colour of the mane remains green. [2a] In Daemons of Chaos, the description is elaborated upon so that the colour of the steed is determined both by the area of Slaanesh's realm whence it originates and any dye or paint which its rider may have applied.

In Hordes of Chaos, and Daemons of Chaos, the beasts are described as able to seek out mortal souls in the same way that a mortal beast seeks out scents.

In Realm of Chaos, the mount had a single attack which could only be used to ensnare a target and prevent that target from moving or attacking. In Hordes of Chaos they possessed no particular special rules. Storm of Chaos granted poisoned attacks and Always Strike First. In Daemons of Chaos, the steed's attack is simply a poisoned attack.