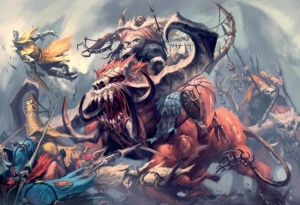 A Stonehorn being ridden by an Ogre Hunter

Stonehorns are huge beasts that dwell in the Mountains of Mourn and surrounding lands. [1a] They are sometimes used in battle by the Ogres of the Ogre Kingdoms. [2a]

Stonehorns are massive beasts of muscle and violence, each several times the size of a Rhinox and - if it can be believed - several times as dense. Intelligence is of little import to these great beasts however, for each Stonehorn is quite literally a living fossil, its skeleton hardened by the same rock as the mountains where it make its home. As legendary as their hardiness is their belligerence; in fact it is said that a Stonehorn will take any opportunity to headbutt something to death and trample its corpse into paste. Such is its colossal mass that the impact of its charge is like a boulder plummeting from a mountaintop, a deadly combination of weight, momentum and a bad temper. [2a]

A Stonehorn in a destructive rage is the kind of sight that causes Ogre to gape in lack-jawed wonderment - for it is a display of raw, unthinking strength. It is common in Ogre camps to hear awed tales of Stonehorns shattering cliffsides or battering down mountain peaks and these are not exaggerations, but everyday occurrences. Stonehorns live by 'mining' rock, breaking off suitable chunks by smashing their impressively horned heads into the large t rock facings they can find. Deposits of precious stone and seams of rare metal are favoured, but the creature will also use its iron­ hard molars to crunch up mundane rubble or any mammals caught out of their dens. Yet as impressive as such feats are, they pale before the sight of a Stonehorn in combat. [2a]

Intolerant to an extreme, a Stonehorn's first inclination is to charge any creature that comes within view. This is no mere bluff or half-hearted measure to scare off any who draw near, but instead a full-tilt attempt to use its horns and bulk to pulverise anything in its way. Few can bear the brunt of such a collision; the Stonehorn can smash mountains asunder, so what hope does a creature of flesh and blood have to stand before such a beast? A Stonehorn's ferocity is not bound only in its charge. After impact, the great beast will rear up on it thick haunches to deliver crushing blows with its forelimbs - hammer blows that can crack a glacier or smash stone to powder. With growling fury, a Stonehorn will swing its horns in sweeping arcs, seeking to slice foes with the surprisingly sharp ridges that form on its stone prongs. [1a] [2a]

Naturally, Ogres have the greatest respect for Stonehorns, for the mammoth creatures are everything an Ogre aspires to be: big, violent, strong and rock-hard. They never tire of telling and retelling their favourite accounts of a Stonehorn's prowess or of the gory aftermath they leave after one of their stone-cracking charges. Whether it is the wide trails of Dwarfs flattened and squished out of their armour, the wet crunching sounds a Stonehorn makes when plowing through Skaven hordes, or fond remembrances of Giants pile-driven deep into the ground, such blood-drenched tales are greedily called for and laughed about at any raucous Ogre feast. [2a]

In their constant quest to headbutt things, Stonehorns often scrape skin, tendon and meat from their faces, leaving bare patches or glimpses of a skull-like stone mask. Over their long lives, Stonehorn become more like the mountain upon which they graze, in a low process of petrifaction. That's not the only effect of the Stonehorn's unnatural diet, for their bodies are dotted with mineral deposits the way freckles appear on humans, and the skull of an elder beast can house enough gems to make a merchant prince weep. Getting hold of those riches is difficult - only a fool comes within sniffing distance of a live Stonehorn, and those that die of natural causes are secretive, plodding off to hidden vales before fully transforming to stone. Those that stumble across such hidden grounds are struck by the eeriness of the silent statues. [2a]

An Ogre Hunter who has tamed a Stonehorn is a celebrated individual. Stonehorns are oblivious to the most grievous wounds and the only proven way to break one is to take one of its eyes, which is no mean feat given the beast's stone­ armoured skull. To achieve this, a Hunter must stand in the path of a Stonehorn charge and, as the ground shakes, stick a spear or land a harpoon in its eye socket. Those who miss seldom live to tell the tale, but those lucky enough to make the shot will be confronted with a rare sight indeed - that of a Stonehorn halting mid-charge as it registers pain for perhaps the first time in its long life. The Hunter can then lead the Stonehorn back to his cave by yanking upon the embedded shaft. After a time, the wound heals, often the eye even grows back, but by then the Stonehorn has been persuaded to allow a rider. A Hunter might keep such a beast as his own mount, or, if he wishes to boost his reputation, he could gift the beast to a tribe, for Stonehorns are much-coveted by all right thinking Ogres. [2a]

Deep in the Mountains of Mourn is the largest graveyard of Stonehorns with hundreds of petrified beasts - treasure hunters seek it out and seek to loot the dead. However sometimes as they begin to chip away at the what they thought was a long dead monster turns out to be a dying Stonehorn with the strength to tear them apart. [2a]