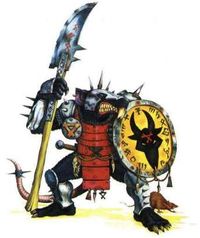 They are, to an individual, larger than the average Skaven, well-muscled, and proficient in the use of various weapons and armour. They are aggressive by nature and are given to overt displays of prowess in order to intimidate those around them. Like the Grey Seers, their future is determined at the time of their birth, for only a Skaven with black fur are elevated to the ranks of the Stormvermin. As such, there is a certain air of ego shared together by all Stormvermin that is lacking in other Skaven groups.[1]

Of course, this camaraderie will only stretch so far. Stormvermin are constantly on the lookout for any weakness in their peers, and those who show such flaws will be mercilessly cut down by their brothers. Position in the ranks of the Stormvermin is achieved through a series of duels, though it occasionally falls on the last remaining survivor of a unit to take command. These officers, known as Fangleaders, are some of the deadliest Stormvermin of all.[1]

Stormvermin regiments are outfitted with the best spoils of war in the clan's armoury and their duties may include forming a retinue or bodyguard for anyone from a minor Chieftain to the mighty ruling Clan Warlord himself. This puts the Stormvermin at the vanguard of the army where they can ensure continued preferential treatment by fighting with ferocity and zeal for their leaders. Most Warlord clans maintain the unwritten law that the first feed after a battle belongs to the Stormvermin. Those who dare to feast before their proper station are often openly attacked by the elite Skaven warriors, who take any opportunity to violently demonstrate their favoured status. As further reward, many Stormvermin regiments are assigned their own legions of Skavenslaves. These lackeys see to the comfort and needs of their masters. on the battlefield the Stormvermin normally form the bodyguard of Warlords and Grey Seers.[1]