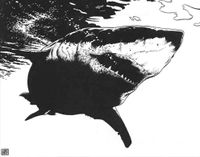 Stromfels, Lord of the Raging Sea is the god of the dangers of the Sea including Storms, Sharks, and Pirates. [1a]

Scholars have argued that he is in fact a Norse god brought to The Wasteland in 1109 IC by the invaders under Snorri Half-hand, others claim he is a aspect of Khorne but few believe this. [1a]

Notably and unlike most gods of the Old World, he is not the son or brother of another deity, nor a mortal ascended to godhood. [1a]

Stromfels is the god of the hazards of the sea, such as reefs, sharks and currents. He is the patron of a particular form of pirate known as wreckers who lure ships to their destruction upon reefs, shoals and rocky coastlines, in order to plunder them.[1a]

Stromfels' greatest enemy is Manann, the god of Great Rivers, Seas, and Oceans. Stromfels is in fact an aspect of Manann, rather than a unique deity. This is regarded as heretical by followers of both deities however, and those who voice such thoughts in the presence of either are quickly and painfully taught the errors of their ways.

Stromfel cultists believe that he is the true form of Manann - the sea in all its fury and its power over life and death. [1a]

Stromfels' followers are the pirates, plunderers and wreckers along the great rivers and coasts of the Old World. The cult of Stromfels is outlawed in the Empire due to its criminal nature.

His holy days are Mitterfruhl (spring equinox) the start of hunting season. Autumn equinox for the start of the storm season.[1a]

He is known in Estalia as El Bicho del Mar. [1a]

A Bolt of Lightning, a Shark or a great trident dripping blood. [1a]