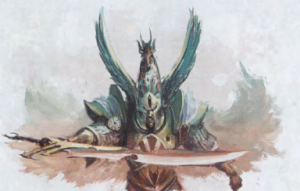 The Widowmaker, wielded by Prince Tyrion

The Sword of Khaine, also known as Widowmaker and Godslayer, is an extremely powerful magical weapon which belonged to Khaine, the Elven God of war.

The Sword of Khaine is the physical manifestation of murder and violence. It seems to possess a malign intelligence, and constantly lusts for blood. The blade calls to Elven warriors, whispering in their minds and urging them to draw it, promising endless power in exchange for bloodshed. To draw the Godslayer is to invite Khaine into your heart and soul.[1a]

The blade has a corrupting influence not just on its wielder, but on all who are in close proximity to it. The malign forces emanating from the Widowmaker change personalities, replacing empathy with callousness, reason with hatred and mercy with ruthlessness.[2a]

The Widowmaker appears to take on different forms to suit the personal preferences of the viewer. To Aenarion the Defender it appeared as a sword. For Malekith, a sceptre, and for Caledor the Conqueror the Godslayer was a lance. In all cases, the sword perpetually drips blood.[1b]

The Sword of Khaine was forged by Vaul, the smith god of the Elven pantheon. During it's forging, it was heated using the fiery breath of Draugnir, father of Dragons. However the bloodthirsty blade took more from Draugnir than was given, and as a result the fate of the Dragons and Draugnir's descendants was forever bound to that of the Elves. [1c]

The Widowmaker is embedded within the Altar of Khaine, in the Shrine of Khaine which is located on The Blighted Isle (off the coast of northern Ulthuan).[1b]

The Blighted Isle is currently under control of the High Elves, who generally seek to prevent anyone from drawing the blade again. However, this does not stop the Dark Elves from attempting to capture the island, and many battles have been fought there.[1b]

During the Coming of Chaos, when the Elven race was on the verge of annihilation, the first Phoenix King Aenarion's wife Astarielle was killed by N'Kari. In his grief, Aenarion travelled to The Blighted Isle and drew the Sword of Khaine, which cursed his line forever.[1a]

The blade exerted it's influence and Aenarion's mood darkened, bloodsports became common in Nagarythe where Aenarion ruled. Aenarion contemplated attacking his friend and ally Caledor Dragontamer, who took issue with this, however the Daemons returned[1a]

Aenarion was already the anointed of Asuryan, but the Sword of Khaine made him nigh unstoppable. He used the sword to kill four Greater Daemons of Chaos at once, although he was mortally wounded in the process. Before dying he thrust the Widowmaker back into the Altar of Khaine, where it remains[1a]. His descendants, the twins Tyrion and Teclis, are tainted by the blade's curse[1d] and the blade is known to have called to Tyrion, tempting him to draw it.[2b]

The Sword is known to have called to Caledor the Conqueror, a later Phoenix King, although he resisted the urge to draw it.[1e]

There is speculation that the Phoenix King Tethlis may have attempted to draw the blade and been slain by his own bodyguard, but others say Tethlis fell to a Dark Elf Assassin, so his fate remains unclear.[1f]

Tyrion led a force to cleanse the Blighted Isle of a horde of Daemons and Dark Elves, killing and banishing N'Kari but resisting the call of the Sword. [3a]

During The End Times, The Widowmaker is drawn by Tyrion who becomes the avatar of Khaine. After Tyrion is slain, the Widowmaker loses its power and becomes an ordinary sword.Needs Citation