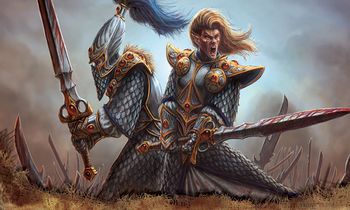 The Swordmasters of Hoeth are the guardians of the Tower of Hoeth. They also act as the agents and bodyguards of the Loremasters and travel the world to do their bidding.[5a]

The Swordmasters of Hoeth are exemplars of the Elven martial arts. Each has studied warfare and personal combat for decades, or even centuries. It is even said that highest masters of the order can slay a foe with but a touch, or kill with a single precisely-pitched whistle. When Ulthuan marches to war, none go more eagerly than the Swordsmasters of Hoeth, for only in war can they truly unleash the full extent of their deadly art. As the Swordmasters advance, their blades blur and weave, knocking aside arrows in mid-flight and leaving trails of bloody spray wherever Hoeth-forged steel tastes flesh.[2]

The Swordmasters' greatswords are forged beneath the Tower of Hoeth, by smiths whose secrets are the envy of even the priests of Vaul. Each elegant blade is as long as an Elf is tall, yet is balanced so perfectly that, to a warrior skilled in its use, it seems as light as a feather. So keen is the greatsword's edge, and so enduring are the enchantments woven into its blade, that its sharpness is never dulled, no matter how many helms or skulls are cloven by its strikes.[2] Every blade is forged and made individually taking their stance and height into account - the tang, pommel and hilt decorated with gemstone and cloth linked with the wielder's hour of birth. [3a]

These legendary elves are not only martially proficient but spiritually wise. Each one must be considered enlightened by the loremasters before attaining the rank of swordmaster. Only then do they realise how sacred uncorrupted life is and why they should protect it at all costs.[1a]

One of the first Sowrdmasters was Aren for whom the White Sword was forged. [1c]

Since the time of Aethis and by order of the loremasters and the subsequent Phoenix Kings the Sword Masters have waged a long secret war against the followers of the Cults of Pleasure, eliminating the cancerous heart of Asur society before it can spread further.[1a]

Since their inception during the reign of Bel-Korhadris, the Sword Masters have distinguished themselves on thousands of occasions. At the Battle of Hathar Ford, a single regiment of Sword Masters guarded the only river crossing for miles around. Commanded by the feared sorcerers, the Coven of Ten, a vast Dark Elf army sought swift passage across the river, but the Sword Masters denied them at every turn. Fighting knee-deep in the swirling river, the Sword Masters inflicted grievous casualties on the Dark Elves, despite the blistering barrage of spells cast by the Coven. After hours of ceaseless combat, the river became so choked with the bodies of the Dark Elf dead, that the corpses blocked the flow of the river, which soon burst its banks. The timely arrival of the legendary High Elf Mage, Teclis to the battlefield brought much needed respite from the magical assault launched by the Coven of Ten, and the Sword Masters swiftly counter attacked, driving the Dark Elves from the field. [1a]

Swordmasters can be found throughout the world, seeking wisdom for themselves or the Loremasters. [5a]