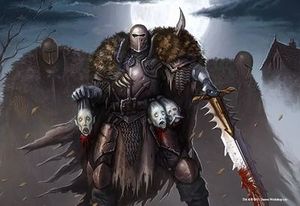 The Swords of Chaos were the greatest Chaos Knights in existence, each member a veteran of Archaon's original warband who had seen countless battles.

All Champions of Chaos follow their gods with reverent faith, but to this warband the worship of Chaos is everything. They are more like a religious order than a band of warriors. The Swords of Chaos are not dedicated to any one of the Chaos gods alone. They follow Chaos Undivided, the Great Nameless One, the Thing That Should Not Be.

This mighty gathering of Chaos knights had been Archaon's loyal warband since long before the reign of Karl Franz, following their leader on his journey to become Everchosen. Each possessed their own dark saga, for they had been powerful servants of the gods even before they threw in their lot with the Everchosen. The Swords of Chaos, were legend in the north. Unusually for their kind, the Swords made no attempt to earn the favour of the gods – they fought for Archaon's glory. In return, they shared in the Everchosen's rewards – the further Archaon rose, the mightier the Swords became. Yet Archaon's authority over the Swords of Chaos was absolute; even the greatest of them now did their master's bidding with an unquestioning instinct that went deeper than words. Indeed, some had stood so long before the open furnace of the Everchosen's will that they had lost their own altogether, becoming little more than automata. These lost warriors were no less deadly for all their mindlessness, still capable of reaping a bloody tally with sword and lance.

The End of All Things

During the End Times, the Swords of Chaos had been ravaged during the final moments of Averheim's fall, but they were still an army fit to match the best that the Incarnates could throw at them. Whether driven by loyalty, personal ambition or the mere joy of battle, all felt the gaze of the Dark Gods upon them. Many fell at the hands of the equally legendary Immortulz of Grimgor Ironhide, and many more to the powerful Warboss himself.

By the time of the Age of Sigmar, the Swords of Chaos had risen to become the First Circle of the Varanguard, the personal armies of Archaon.