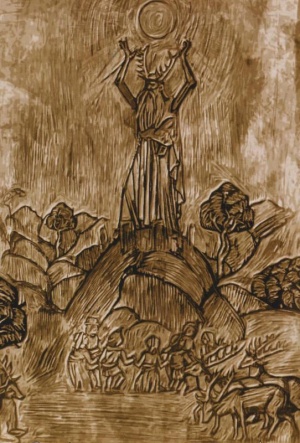 Taal, god of the wilderness and the storm.

Taal is the god of Nature and Wild Places. He is the husband of Rhya, the father of Manann, and the older brother of Ulric.

Taal has different symbols according to his aspects. As Lord of the Beasts, his symbol is a stag skull, or a stylized human head with antlers. As the god of weather, it is a stone axe, with which he is said to cause thunder, lightning and avalanches by striking the mountaintops.

Older than Ulric and more powerful than even Sigmar[2], Taal is normally portrayed as a powerfully built man with long, wild hair, dressed in animal skins and wearing the skull of a great stag as a helmet. It's also claimed that he can take the form of a great bison or bear.

Taal's foremost holy day is the spring equinox, which marks the reawakening of nature after its winter slumber. The holy days of his brother Ulric are also kept by Taal's followers as minor festivals.

Taal is the god of nature. He is behind all the forces of nature which are beyond human control - the wind, rain, waterfalls, rapids, avalanches and landslides. He is the master of beasts, forests and mountains. His domain is the wild places of the world, and any that venture into them are expected to show him proper respect or risk his wrath.

Taal is worshipped throughout the wilds of the Old World and most of his followers are rangers, foresters, farmers, hunters and trappers - people who depend on and live off the land and live in accord with the natural world. His worship is strongest in the north and the east of the Old World, and is centred on Talabecland, where the river Talabec is held sacred to Taal.

The traditional form of temple to Taal is a circular structure built of rough, unmortared stone, with a conical roof. His shrines are often sacred groves marked by the skull of a stag, bison or bear hung in the oldest tree. Mountain shrines are often cairns topped with the skulls of same creatures. There are also monasteries to Taal, like the La Maisontaal Abbey located in the Grey Mountains.

Taal's cult has friendly relations with those of his brother Ulric and his son Manann, and with the druids of the Old Faith. Taal's greatest hatred is for the followers of Chaos.

Sub Cults and other aspects

Taal is known by various names from place to place and his worship is not restricted to humans. To the Elves he is Torothal, Goddess of Rain and Rivers. Taal also has many similarities with Kurnous, the Elf god of the hunt. Among hunters and trappers in parts of Middenland and Talabecland, he is Karnos, Lord of Beasts.[1]. To some fishermen, he is Karog, God of Rivers.