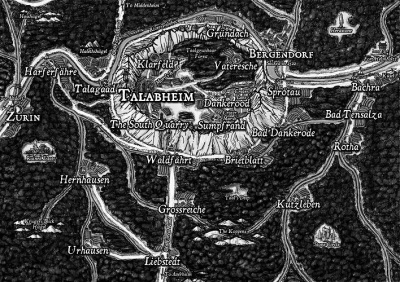 The city of Talabheim and its surrounding area.

One of the four city-states of The Empire, Talabheim is the capital of Talabecland and the home of its Elector Count.

The city lies in the centre of the Great Forest and is sometimes nicknamed the Eye of the Forest[1c][2][3], reminding everyone that it is a place of safety surrounded by danger and darkness.

Located at the southern bank of the river Talabec[1a][3], the city is a very important trade centre[1c], being a major ferry point[1b] used by the traffic of the Old Forest Road. The deep port of Talagaad receives goods transported upon the river[1c].

The city was built upon a very large crater[1c][3], the result of a meteor impact. The city isn't large enough to cover the whole crater; this enables the existence of farms which in case of a siege produce enough food to sustain the city's population.

The rim of the crater has been fortified [5a] and the only entry is a tunnel which connects to a narrow road which leads to Talagaad[1c]. The tunnel is guarded by two fortresses, one at each end. Due all these formidable defensive characteristics the city is considered all but impregnable[2][3].

Legends say that the god Taal fought and slew a immense Wyrm which he cast down onto the world making the crater that was later inhabited by the people of Talabheim. [5a]

For most of its life, Talabheim has been attached to Talabecland. However, there were at least two points in history when it achieved independence. [4]

A maiden and healer took up arms and led the defence of the plague-ridden city against Skaven and dies a hero, her image often being used on banners and shields whilst the motto None Shall Pass is still a favourite of the defenders of the city. [5a]

In 2429 IC when the deposed emperor Dieter IV was made Elector Count of Talabecland while the old Elector Count, Frederik, retained control of Talabheim. During both instances, it is unknown when or how they were united again. [4]