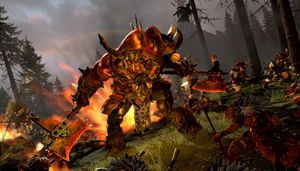 Taurox, the Brass Bull, is monstrous engine of destruction, formed of living brass in the shape of a terrible Doombull. However, it was not always so. Taurox was once flesh and blood, although no less terrifying to face.[1b]

As the chieftain of a fearsome Minotaur tribe, Taurox proved his superiority over the other creatures of the forest by slaying and devouring them, so much so that the ground beneath his feet was forever damp with the blood of his victims. One night an emissary of the Dark Gods entered the mortal realm, crawling from the remains of one of Taurox's rivals. The Daemon was filled with dark energy, and met the gaze of Taurox with its hollow black eyes. However, before it could open its mouth to speak it had its head ripped off and swallowed whole by the blood-thirsty Doombull.[1b]

A moment passed, and then Taurox was seized by a terrible vision of a world filled with blood and corpses. His body shook and spasmed, he roared and screamed, until he drew his Rune-tortured Axes and slew every member of his tribe. For a year and a day he rampaged across the land, killing every creature unfortunate enough to get in his way. His kills include Beastmen tribes, witch covens, caravans of Strigany, Ogre mercenaries, Empire patrols, imperious knights and two-headed Giants.[1b]

Finally, Taurox came to the vale of Leitberg, where he killed so many citizens of the Empire that he created a river of blood. Completely exhausted, Taurox collapsed. He would have died if it were not for the attentions of the Gods of Chaos. They still had a use for him, so Taurox was reborn in the form of living brass. He would never tire, or grow weary of the rage that was consuming him. He became all but immune to the weapons of his many enemies, except for an area of flesh on his throat that remains vulnerable. An expert sword thrust or arrow shot could slay him instantly. Such is the price of spiting a Daemon.[1b]

The legend of Taurox spreads across Talabecland. The tales speak of the Brass Bull marching at the head of an army of Minotaurs, the column of armoured monstrosities stretching for a mile behind him. Wherever the army goes it leaves behind naught but blood and ruin. However, the most terrifying part of the legend is the direction that the army is taking. Straight towards Talabheim.[1a]